IT'S A SWEET DEAL FOR LIME BIKE

MONEY FOR NOTHING, AND OUR STREETS FOR FREE:  ALICE BURCH AND TOM BENTON WERE BUSY OVER THE SUMMER WORKING TO GIVE THIS START-UP BIKE SHARING COMPANY A REALLY SWEET DEAL.  IT'S LIKE THEY THINK MIAMI SHORES IS THEIR PRIVATE FIEFDOM TO DO WITH AS THEY PLEASE

I should state at the beginning that I am not anti-bike, nor am I anti-Lime Bike. I own a bike, and I'm always interested in watching start-ups that  seem to have a vision for doing things another way.

However, I am always against the absence or abuse of process that Tom Benton seems to employ when there is an issue that that is favored by him or one of his cronies, and his willingness to repeatedly ignore process has unfortunately become a hallmark of his treating the Village as his personal fiefdom.

On Tuesday there will be a Memorandum Of Understanding (MOU) going before the Council for approval that I think should be torn up and thrown away and the proper process be followed.

That process involves the requirements for dealing with what is called an Unsolicited Proposal. That Lime Bike made an Unsolicited Proposal is evident from the following paragraph that was part of a Memorandum that Councilwoman Alice Burch sent to her fellow Council members on August 18th.  Burch makes it clear that Lime Bike approached the Village, and only after they that, did the Village extend an invitation for them to come and make a presentation. You can read her complete memo at the bottom of this story. 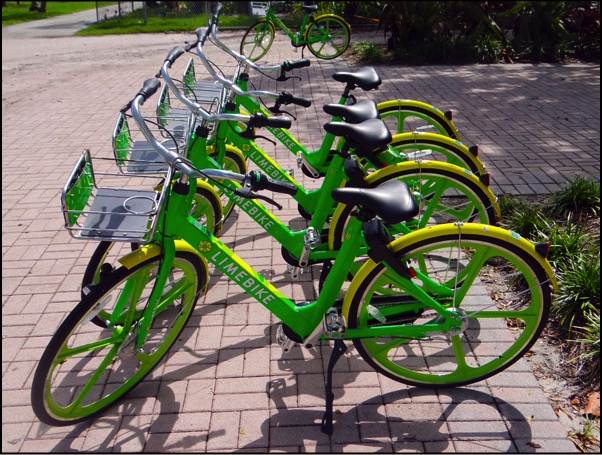 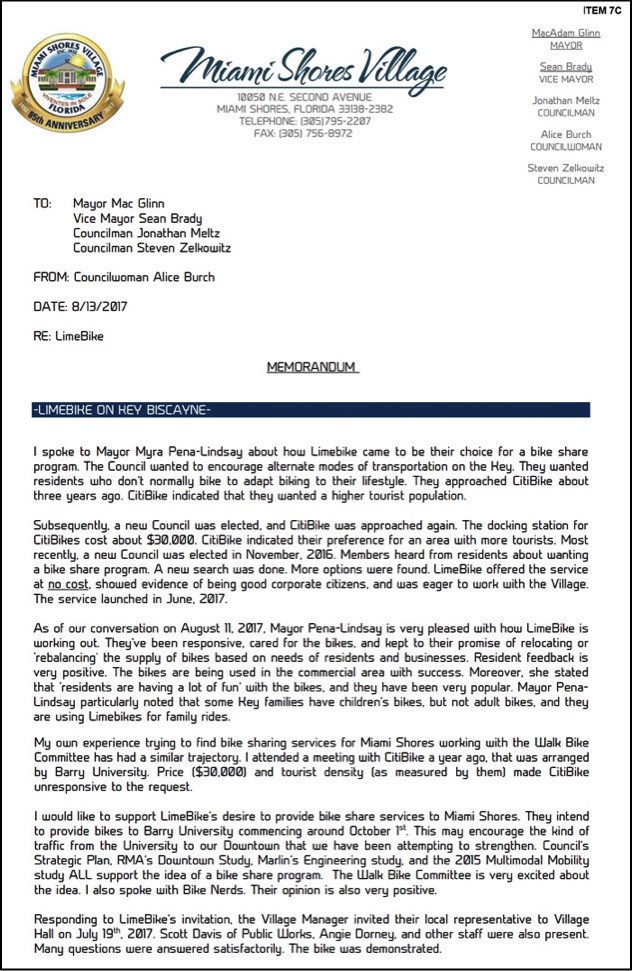 Over the years Florida has developed a patchwork of statutes and administrative guidelines on how to deal with  unsolicited proposals for Public/Private Partnerships, transportation projects, and even Space Florida. Counties, cities and municipalities throughout Florida have also crafted their own rules reflecting state statutes.

I've written a few stores over the years involving Unsolicited Proposals  because even with procedures in place for dealing with these proposals, unsolicited proposals have often become synonymous with insider dealing and political hocus pocus

Lime Bike's business model is described in the MOU being presented to the Village Council as a "multi-modal transportation option," requiring the use of Miami Shores streets.  The language in the MOU states that the "Village authorizes and licenses (on a non-exclusive basis) Lime Bike to use Village Property identified in Exhibit A solely for the purposes set forth in Section 2 of this agreement.

That fact that the Village states that they are licensing the streets of the Village raises a question of whether calling this agreement a Memorandum Of Understanding instead of a Licensing Agreement has been done so as to mislead and minimize the full impact of this deal. It also raises serious question about whether Tom Benton and the Village Council are looking out for the best interests of the residents by giving away a resource that is collectively owned by the residents that this company intends to make money from.

The granting of this "license" also all but precludes any other bike sharing program from ever having access to the Village while this agreement is in place, because it is questionable whether the Village will be able to sustain even one bike sharing company, much less two.

These are important issues not only on their own, but also because they go to the heart of why Unsolicited Proposals are considered minefields where the interests of the proposer are often at odds with the best interests of a government agency or community, and why it has become common place for agencies or governmental bodies to issue an RFP after receiving an unsolicited proposal so as to better articulate the governmental needs and requirements as well as providing an opportunity for other like-minded or interested parties to also bid on the deal.

If you followed the fight between art dealer Gary Nadar who approached the Miami-Dade Community College with his idea to build his own Latin American Art Museum on the parking lot that the college owns just north of it's downtown campus on Biscayne Boulevard, that was based an unsolicited proposal that he made to the MDCC.

MDCC responded to Nadar's proposal by issuing an RFP, which resulted in additional proposals being submitted, including one from billionaire developer Jorge Perez, which in turn triggered a big fight between Nadar and Perez, including lawsuits, resulting in a suitably nasty and Miami ending where MDCC was ordered by the 3rd DCA to pay Nadar's legal bills.

A second recent example was when developer David Martin approached the City of Miami's Parking Authority with an unsolicited proposal to buy their Oak Street Parking Garage in Coconut Grove. This proposal also triggered Art Noriega, the Executive Director of the MPA to issue an RFP which created it's own uproar when it was discovered by the Miami Herald that the bids by two other companies were higher than Martin's bid.

A third example was when I discovered earlier this year that the Make-A-Wish Foundation was attempting to get the City of Miami to give them a large portion of the parking lot across from Monty's Seafood restaurant in the Grove to build a new headquarters. That deal was shut down by the US Department of the Interior which continued to hold veto power over the uses of that waterfront land.

Among other issues that should raise concern among residents is the revelation that the agreement between the Village and Lime Bike calls for a minimum of 500 bikes, with as many as 750 bikes to be parked on Village sidewalks and property as well as on private property.

Lastly, there is a time honored tradition in American business for companies like Lime Bike to give away swag to it's supporters and benefactors, as well as free tickets, free vouchers or free rides.I 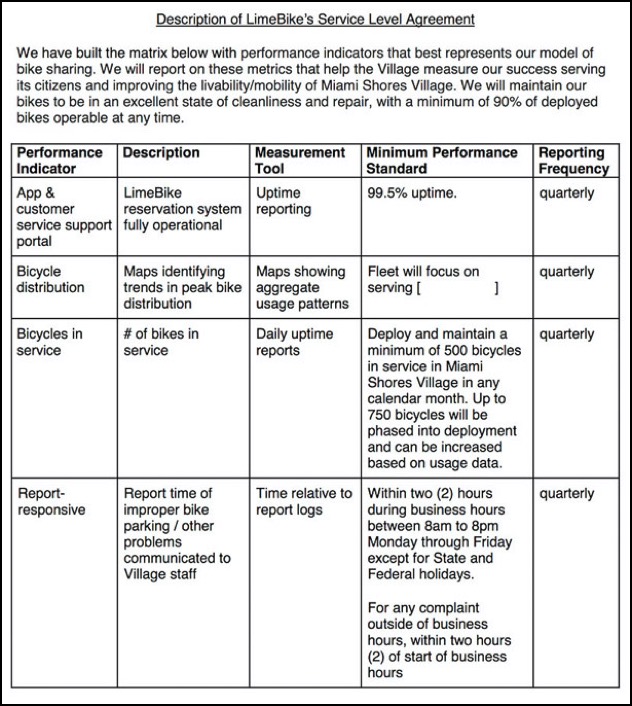 Where in the hell do you park 500 bikes, much less 750 bikes in the Village without it becoming a cluster fuck?

And who is going to ride them?

Even worse, once these bikes start getting stolen - and you know they will - how much will that end up costing the residents when the Miami Shores Police Department starts being called on to start to recover these bikes?

Even though Lime Bike claims to have devoted time and money to making their bikes theft proof, or at least theft recoverable through a GPS unit installed on the bikes, the likely reality is that while the first round of bike thefts will probably be easy to solve as a result of these GPS units, if these bikes draw the interest of an organized criminal gang, they will soon figure out ways to circumvent the GPS Units and the self-locking apparatus on the back wheel.

Miami is the home of some pretty sophisticated criminal gangs, and the idea that there are 500 to 750 fancy bikes sitting around on sidewalks of Miami Shores that you can pick up and stick in a truck you can bet that stealing these bikes and shipping them off to Caribbean islands and Central American counties on tramp freighters will become a cottage industry as these guys figure out how to disarm the GPS units..

Lime Bike is a company founded by two bright guys in California who earlier this year managed to get $12 million in start-up funding from some silicon valley venture capitalists.

The primary effort of the company now is to place their bikes in as many communities as possible as a way to get market share,  the necessary requirement they'll need to raise more money.  This is a business plan that we've seen in recent years with start-ups such as UBER.

Some communities over time will prove to be more receptive to the Lime Bike business model. There is no assurance that Miami Shores will be one of those communities.

The one thing that we can predict, even at this point is that in order to become financially viable the current $1 dollar for 30 minutes of bike time, will over time have to be increased because venture capitalists want their money back with interest, and if you take those $12 million dollars and covert the $1 dollar for a half hour into $2 dollars for an hour, that comes out to 6,000,000 hours.

Divide those 6 million hours by 24 hours in a day, and your looking at 250,000 days of bike rentals just to cover the original $12 million in start-up capital, and that's not counting the costs of the bikes or any of the other associated business costs and salaries.

For sure, we can also expect that the pristine look of these bikes will soon disappear to accomodate advertising, but even that will not necessarily put that big a dent in servicing the company's debt.

In the event - small that it might be - that Lime Bike starts making a profit from their bikes in Miami Shores, we should expect that we should receive some benefit. Yet, no where in this MOU is their any reference or language that mentions future negotiations on profit sharing or even covering the costs of police and/or the installation of bike racks to accomodate these bikes.

One of the selling point that was mentioned at last week's Council meeting was the fact that unlike other bike sharing programs that use bike racks installed on city sidewalks, the bicycles used by Lime Bikes - because of their self-locking device - can be parked anywhere.

Yet in the MOU the issue of the Village installing "bike racks and/or painted bike parking spots," is cited, without any language that requires the costs for these efforts to be covered by Lime Bike.