MAKE A WISH, MAKES A WISH

iT CAUGHT FOLKS IN THE GROVE BY SURPRISE WHEN THEY DISCOVERED THAT THE MAKE A WISH FOUNDATION WANTED TO BUILD A NEW HEADQUARTERS IN THE PARKING LOT BETWEEN MONTY'S AND SHAKE-A-LEG,  AND NOW THE QUESTION THAT NEEDS TO BE ANSWERED IS WHY IS THE REGALADO ADMINISTRATION WORKING SO HARD TO KEEP THE SPECIFICS OF THIS DEAL A SECRET

"The primary objective of the Coconut Grove Waterfront

Plan is to reserve waterfront lands for water dependent

uses, and to give the public access to the water. An office

building can be placed anywhere, and the purpose of the

Make A Wish Foundation are not water related,"

Former Chairperson of the Coconut

Now, I want to make this clear at the outset, I have nothing against the Make A Wish Foundation.  I think that what they do is worthwhile, and brings happiness and joy to kids who deserve whatever happiness or joy they can have in their lives, but once again, the Regalado administration is trying to pull a fast one.

Sometime in the later part of 2016, the Make A Wish Foundation approached the City of Miami with a desire to build a new headquarters building in the parking lot across the street from Monty's.

At the January 26th, 2017 City Commission meeting the following  Resolution was sponsored by the Mayor.

Although the Resolution was initially part of the Consent Agenda, it was pulled by Commissioner Russell, so that he could make an amendment, and in the course of his comments he acknowledged that he had by then had 2 meetings facilitated by Daniel Rotenberg, the Director of DREAM: 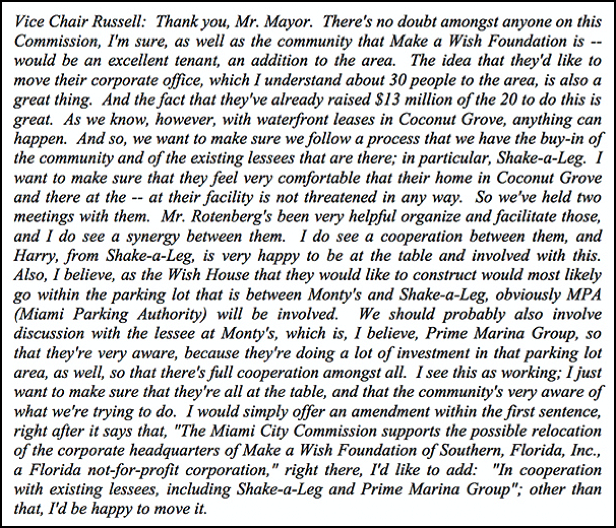 Unlike the Nadar proposal which was cancelled after the lawsuits, the Miami Parking Authority ended up ignoring and sweeping aside the criticisms and complaints from Grove residents and business owners who argued they were going to be negatively impacted by this deal.

By failing to issue an RFP, which should have been triggered automatically upon receiving Make A Wish's unsolicited proposal last year the city was able to keep this secret real-estate project from becoming public, because had this information became public through the issuance of an RFP, not only would any number of other civic groups who do good work in the community decide that maybe they'd like nothing better than to have an opportunity to move their offices to a building to the city's waterfront, but more importantly, the publicity from all of this would have alerted folks concerned about the waterfront about this effort, which would have generated unwanted attention of the kind that they've tried to tamp down by limiting the amount of information to a minimum.

An alarm bell should always go off when a proposal for the use of city land - especially waterfront property - is only accompanied by aerial architectural renderings.

The rendering at the top of this story, and a second rendering that shows a slightly different positioning of the buildings, were the only exhibits provided to supplement the request by the DREAM to the Waterfront Advisory Board for their approval of this project.

The renderings were done by the Coconut Grove firm Arquitectonica, and if there are any other renderings of what the headquarter's building might look like, including how many stories, and square footage they have not been made public.

There was however, an email from the President of the South Florida Make A Wish Foundation to Daniel Rotenberg that should have been provided the Waterfront Advisory Board, but understandably wasn't, because in addition to providing information about the size of the building it provides a description of the use of the building.

Rotenberg, who is the Director of the city's Department of Real Estate Asset Management (DREAM,) has previously been accused of questionable behavior since he's been with the city.  Most notably, I and others raised serious questions last year about his relationship with one of the companies involved in the RFP process to redevelop the Rickenbacker Marina  - a project that he was in charge of - because Robert Christoph Jr., one of the principals of the company that "won" the bid was at the time involved in another marina development deal with James Tate, of Tate Capital, an investment firm where Rotenberg had worked prior to coming to the city, and which continued to list him as part of the management team on it's website.

While there was a belief at the time that Rotenberg had had his thumb on the scale during this RFP bid process, there was nothing that provided concrete evidence of him working as a dealmaker behind the scenes.

This time out, there is!.

Here is an email that was sent two days before the January 26th Commission meeting from Rotenberg to Harry Horgan, the President of Shake A. Leg, and Scott Silver, a Shake A Leg Board Member. 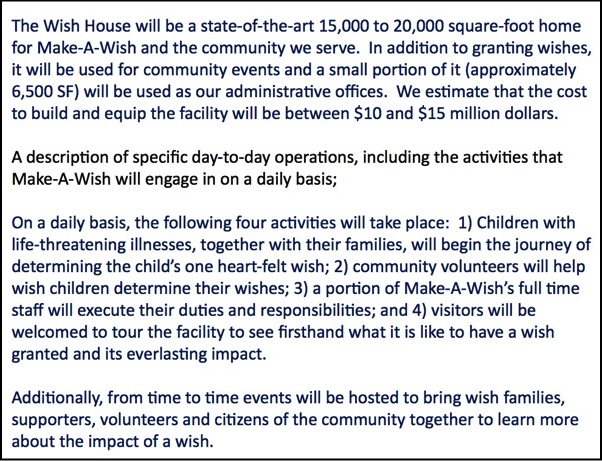 I refer you to the initial epigram quote by Michelle Niemeyer:

"The primary objective of the Coconut Grove Waterfront

Plan is to reserve waterfront lands for water dependent

uses, and to give the public access to the water. An office

building can be placed anywhere, and the purpose of the

Make A Wish Foundation are not water related,"

It is almost impossible in Miami to discuss the ways in which the Mayor, the City Commissioners and senior officials in the administration deal with public waterfront property, without also discussing the high levels of dishonesty and chicanery that these same officials have exhibited time after time when it suited their purposes to ignore the law.

Last week there was a Special Commission meeting resulting in a unanimous vote by the Commission to have the Regalado administration notify the Flagstone Group that they were, after almost 16 years, in default of their lease.

The self-congratulatory fervor on the part of the Commissioners after voting for this default failed to acknowledge that 3 of these same Commissioners were on the Commission in 2010 and 2013 when 2 of them chose to ignore the law, allowing the Flagstone Group to continue to engage in the pattern of screwing the city that had started in 2002.

Next month, a new RFP proposal for the redevelopment of the Rickenbacker Marina will be coming back before these same City Commissioners for Round Two of what could best be described as The Battle For The Marina, and like last time, Daniel Rotenberg is supervising the proces.

Not only will the allegations from the first battle waged last summer be reintroduced, but a whole series of new allegations are bound to be raised.

Insiders know that this marina fight is all about the payoffs of one kind or another that the members of the outgoing Regalado administration expect to receive from the winning bidder, because this is a 75 year, hundreds of millions of dollar deal, and no one - not even the tooth fairy - believes that, after what happened the first time that this time the award of the contract will be based on merit or fairness.

Money, and often very serious money, is the driving force behind many of the deals that get approved at Miami City Hall.

NOT ONE SINGLE DOLLAR BILL HAS BEEN REPORTED IN ANY OF THEIR CAMPAIGN FINANCE REPORTS!

To paraphrase a famous analogy about lawyers, how can you tell when the Mayor and Miami City Commission are planning to screw the taxpayers over a waterfront land deal?  Simple!  Anytime they open their mouth, and this time will be no different! 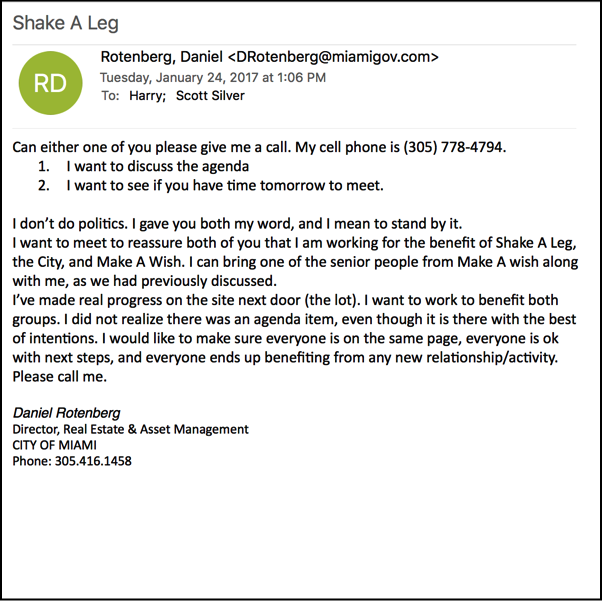 This email raises serious questions about Rotenberg's legal and ethical responsibility to look out for the public's interest, because this email seems to be focused on calming the concerns of the private companies involved over their concerns that information about this deal was going to be made pubic, rather than over the transparency that this kind of a deal required.

What Rotenberg failed to inform these companies of was that their concern over the public disclosure over this item being discussed by the City Commission was not only misguided, but that he himself had a legal obligation to take this project before the Coconut Grove Waterfront Implementation Committee, staffed by the City Manager's office, that meets monthly, and was expressly created as part of the Coconut Grove Waterfront Master Plan as a way to thwart potential insider deals from being done behind the backs of Miami's citizens.

Rotenberg never did that, and all of this came to light at last week's meeting of the Waterfront Advisory Board, where, after receiving a presentation by one of Rotenberg's staff, the Board voted unanimously to oppose this effort because it, "was inconsistent with the Coconut Grove Waterfront Master Plan."

Miami's history is ripe with a history of projects involving city waterfront land that have found themselves in conflict with various citizen advisory groups such as the the Coconut Grove Waterfront Implementation Committee, the Waterfront Advisory Board, and the Virginia Key  Advisory Board, who have often been excluded from the review process as a way to allow the City Commission to give away land to powerful financial or political supporters connected to the Mayor or the Commission.

Were it not for a handful of Coconut Grove residents who pay attention to waterfront issues, and who attended the Waterfront Advisory Board meeting, news about this effort might not have filtered out into the community, because among the requirements that Rotenberg and his Department of Real Estate Asset Management failed to follow besides failing to take this before the Coconut Grove Waterfront Implementation Committee was ignoring the provisions for how unsolicited proposals are normally treated by the City.

Unsolicited proposals or bids are made all the time to government agencies, be they local, state or national.  A lot of people and companies have their own ideas of how government services or government buildings and land could better be used, and sometimes they expend large sums of time and money in an effort to convince the government to go along with their ideas.

There are different processes and procedures for different kinds of proposals, and locally whenever an individual or company shows up with an idea to either buy or use a government building or use a piece of government land for a purpose other than the one it's being used for, the process leads to an RFP being issued in order that other folks who might have their own ideas might have the same opportunity to have their ideas considered. It's also to insure that the process becomes open and not subject to claims about any agreement not being an insider deal.

Two recent examples in Miami serve as examples of this.

The first, and most controversial - although they were both controversial - was the unsolicited proposal by local art dealer Gary Nadar who approached the Miami-Dade Community College with his idea to build his own Latin American Art Museum on the parking lot that the college owns just north of it's downtown campus on Biscayne Boulevard.

Nadar's proposal triggered MDCC issuing an RFP, which resulted in additional proposals being submitted, including one from billionaire developers Jorge Perez, which in turn triggered a series of actions, including lawsuits, resulting in a suitably nasty and Miami ending where MDCC was order by the 3rd DCA to pay Nadar's legal bills.

The second example was when developer David Martin approached the City of Miami's Parking Authority with an unsolicited proposal to buy their Oak Street Parking Garage in Coconut Grove.

This proposal also triggered Art Noriega, the Executive Director of the MPA to issue an RFP which created it's own uproar when it was discovered that the bids by two other companies were higher.