This afternoon Dan Kerr, a Captain in the City of Miami Police Department, and a resident of Miami Shores, sent the Village Manager, members of the Village Council, and candidates for the April 18th Village Council election the following letter, which speaks for itself.

For several months, I have been asking the council to address the serious staffing problem within the Miami Shores Police Department. I have requested that the village conduct a comparison of neighboring agencies to compare the villages current budget, supervisory and officer staffing levels, to commensurate departments in the South Florida area. These comparisons can be conducted in-house, with no cost to the city, using public documents and a few phone calls.

At the February 21st council meeting, Chief Lystad disputed the need to conduct a comparison because, “One agency really can’t be benchmarked against another…” He further went on to justify this statement by reporting to the council that the Key Biscayne Police Department experienced a call volume of 70,000 calls for service in 2016. You can find the exact comments at the 28:30 mark of the February 21st council meeting. link:

To say the least, I was surprised by this statement. How a city, with only 24 police officers, would respond to approximately 200 calls for service a day seems untenable. I later contacted the chief and asked him if he had made an error regarding the statement to the council of 70,000 calls for service and his response to me was, “I think you will find the number of calls for service at Key Biscayne greater than the number I referenced” (See attached email correspondence)

I have attached the total calls for service from the Key Biscayne Police Department obtained through a formal public records request. The actual number of call for service handled by that department was 38,387, nearly half of the Chief’s claim. Of this number, over 25,000 of the calls were Directed Patrols and Watch Orders.

Since the chief chose to compare the KBPD I looked further to the stats of that department. The most glaring statistic was the number of robberies and residential burglaries, the crime that most affects residents and the general feeling of safety in the community. The Key Biscayne Police Department responded to only 2 Robberies and 15 Burglaries in 2016.  In comparison, Miami Shores reported 34 Robberies and 131 Burglaries. Miami Shores had more robberies in the parking lot of the Starbucks then in all the City of Key Biscayne. Of course, there are stark differences between Miami Shores and Key Biscayne, but I didn't begin the comparison, the Chief did.

While there are many differences between Miami Shores and Key Biscayne, one thing is similar, their police budget is $6.9 Million. (See attached budget) This is approximately the same budget allocation for public safety in Miami Shores. Within that budget, Key Biscayne has basically the same number of police officers, sergeants, and lieutenants. They also have an additional two deputy chiefs budgeted. This statement bears repeating, the Key Biscayne Police Department, with a $6.9 million-dollar budget, has the same budget, more command staffing, and nearly 1/10th of the crime as Miami Shores.

I am asking the council, and copying the candidates that could be assuming the upcoming vacancies, to take the budget and staffing of public safety seriously. I do not expect a reply from Mayor Burch or Vice-Mayor Zelkowitz as they have yet to respond to any of my prior correspondences regarding public safety.  The safety of my family, my neighbors, and all visitors to the village should be the most important topic that can be addressed by the council. All discussions in front of that body should have an undertone of the impact of public safety. I implore you to conduct a survey of neighboring jurisdictions, specifically the budget and staffing levels of their police departments. You will find that Miami Shores Police Department is lagging behind in several areas. The Chief and Manager have obviously not prioritized the budget and staffing of the police department and their statements to the council and residents have proven their stance against an assessment of their department. The residents of the village will hold the council members to that responsibility, no matter whom ends up holding those positions.

In closing, I would like to reiterate my level of satisfaction with the men and women of police department. The Village of Miami Shores has one of the most educated, experienced, and compensated police departments in South Florida. While the lack of diversity of the appointed command staff raises some eyebrows, the rest of the department is a good representation of the village and are appreciated by the citizens they serve. I ask that you take your responsibility for providing public safety seriously and perform your due diligence to understand the staffing needs of the department. As always, I can be reached anytime via phone or email if you would like to discuss any of these items further. I thank you for your service to the village.

2016 Police Calls by al_crespo on Scribd

Email to Chief by al_crespo on Scribd 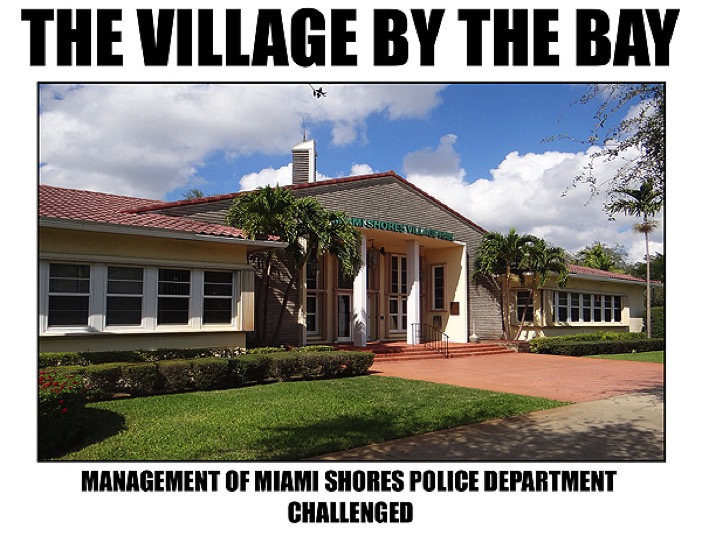