IN A BACKROOM DEAL WORTHY OF A SUB PLOT IN GAME OF THRONES, IT APPEARS THAT AN AGREEMENT HAS BEEN REACHED ON JORGE COLINA BECOMING THE NEXT CHIEF OF POLICE.  OF COURSE, PART OF THE DEAL ALSO REQUIRED THE THUG IN UNIFORM, AKA JAVIER ORTIZ BEING PROMOTED TO CAPTAIN. 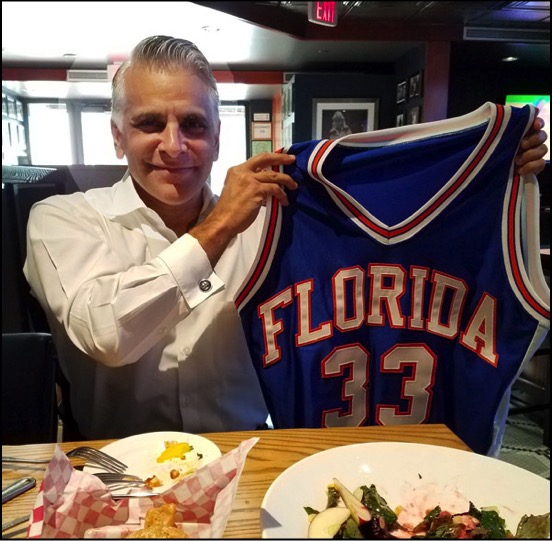 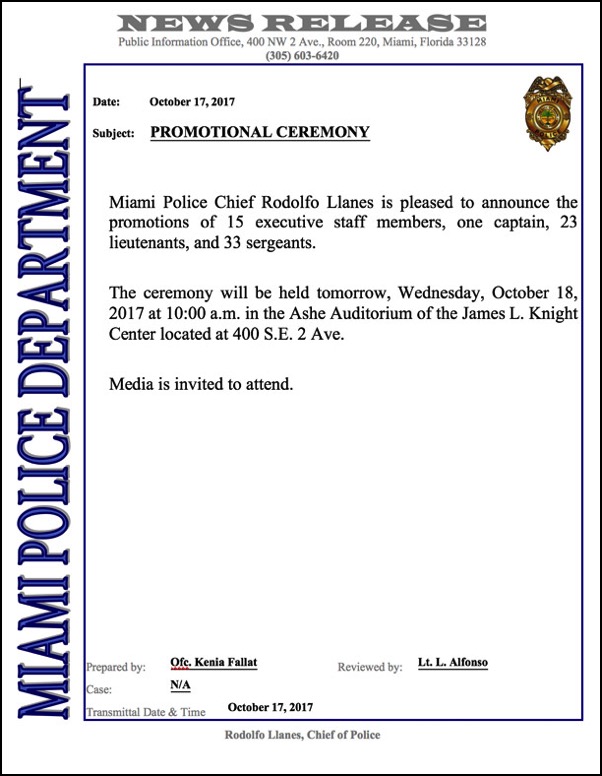 So first, it was going to be Dennis "Lexus" Jackson being promoted to Chief in a last minute deal by Regalado to screw Francis Suarez, and also protect his back against any possible criminal investigations after he leaves office.

Then it wasn't going to be Jackson because City Manager Danny Alfonso wouldn't do that to Suarez, even though there's little love lost between them.

Then it was going to be Ralph Suarez, who may or may not be related to Francis, but who was supposedly close to the family and is currently on the Miami Gardens Police force.

Then there was confusion, and nobody knew nothing.

Finally late last week the word started getting out that like a meeting of Cardinals to select a new Pope, a decision had been made and it was Colina.

White smoke was rumored to be seen rising from the roof of police headquarters, and some mistook the rumors of smoke for a ritual burning of police files on Regalado and his cronies before someone could leak them to me, but they just had a fevered imagination, because I already got those files. (Just joking. I'm always eager to get my hands on any documents involving the Regalado gang.)

A deal was reached, and no one has denied it upon being questioned. Codina will become the Chief after Francis Suarez becomes Mayor.

As a sop to Regalado, his long time toady and all around thug pal, FOP President Javier Ortiz, who was 3rd in line to be promoted to Captain, will get the bars ahead of the first 2 in line for promotion.

In order to get in front of the other 2 candidates, those two will be promoted to Commanders, and supposedly, although I'll believe it only after it happens, Ortiz will resign from being the President of the Fraternal Order Of Police (FOP.)

Even though the FBI couldn't nail Ludo in that case, the tape was so damning that they gave it to the Miami Police Internal Affairs Unit, who, in cahoots with Ortiz failed to complete their so-called investigation until after the 180 day grace period that police are afforded before they need to be charged of serious wrong doing.

The case timed out, and Lugo only got a suspension.

If Ortiz goes, will Lugo become President of the FOP?

If you want to hear a real FBI undercover tape, and read about the story of Lugo in detail, click HERE.

If you have nothing better to do this morning, here's an invite to the event that will handle all of the other promotions,other than the Chief's. Tell them you're representing The Crespogram Report. 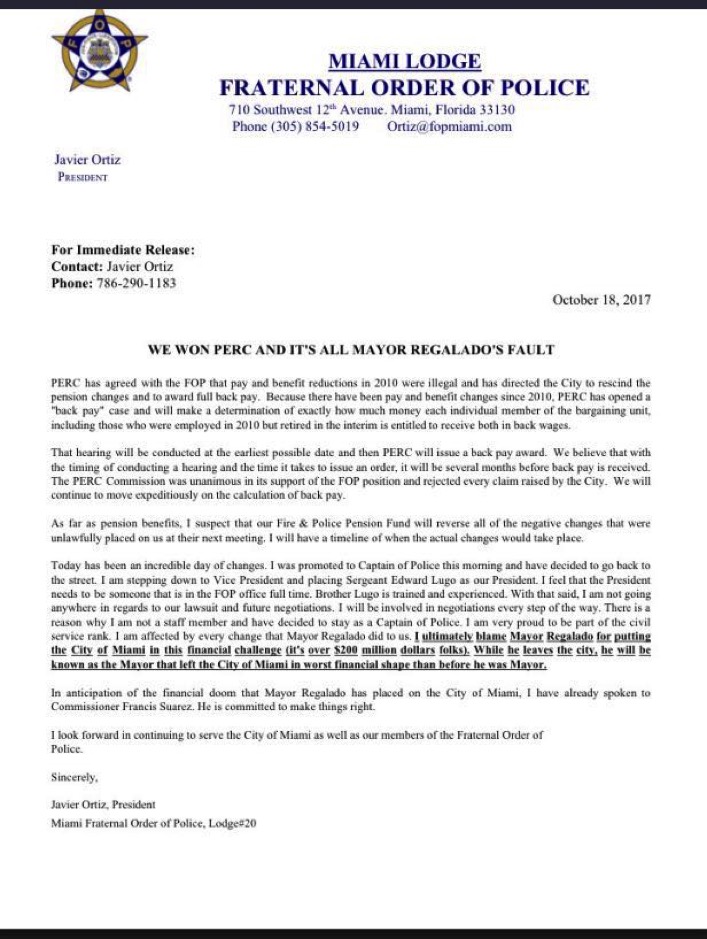 ONCE AGAIN, AN INDEPENDENT DOCUMENT CONFIRMS WHY I'M CALLED CRESPODAMUS

Newly promoted, and well known Thug In Uniform, Javier Ortiz, sent the following letter to the membership of the FOP confirming that he was stepping down as the President of FOP Lodge 20, and that his BFF, and fellow Thug In Uniform,  Edward Lugo, would be replacing him.

To appreciate just how gangster these guys are, Ortiz states in the letter, "I am stepping down to Vice President and placing Sergeant Edward Lugo as our President."

How about that, he's "PLACING" Lugo as President.

So much for an election or a vote of the membership. These guys have treated the FOP as their private piggybank for years, rigging the elections, refusing to allow an independent audit of the FOP books, and flying all over the country and having a good old time on the member's dues money.

Even better that the Lugo stuff, is that after 8 years of sticking his nose so far up Tomas Regalado's ass that every time Regalado opened his mouth you could see the tip of Ortiz's nose bobbing up and down, now that Regalado is weeks away from walking out of the door, Ortiz has turned on him.

If it was anyone other that Regalado you might have some sympathy for him, but Regalado, who used Ortiz as much as Ortiz used him, deserves to have this rat-fuck dirty cop turn on him.

It's a dirty, scummy gang of thugs pretending to be police officers that have operated in Miami with impunity for the last 8 years, starting with that lying fuck of a Chief who's lack of attention and concern to doing his job allowed the homicide evidence rot in the storage container under I-95  for years without doing anything about it, and who definitely knew about the 11 revolvers taken out of the Property Room.

The fish rots from the top, and Rudy Llanes definitely stunk with the smell of corruption and cronyism.

Jorge Colina is going to have his hands full, and while I'm sure he believes he'll be able to wrestle the tiger, the history of the Miami Police Department says that becoming the Chief of Police is where good men falter, and bad men plunder, and no matter who the Chief is, the taxpayers still end up getting fucked in the end.

LINK TO EDWARD LUGO 2011 STORY HAS BEEN REPAIRED. SEE BELOW