The question claims that your property taxes would increase $170 to $190 per year TO BUILD, OPERATE AND MAINTAIN a new Community Center.

While we now know that claim is not true, the fact is that when the questionnaire was prepared, whoever reviewed and approved those numbers had to have known then that those numbers could not be true.

The evidence become concrete that these numbers were inaccurate when you actually read the Ballard*King Report, because the report first includes these same numbers on page 60, where you notice that only 38% of the residents actually stated that they would be willing to pay this amount,

but 8 pages later, the report included the first construction budget prepared by Councilman Mac Glinn's company, Skanska, where the initial projected cost of building the center was $18,181,157.00.

When it comes to keeping public officials accountable, it cannot be repeated enough that first, and foremost, it's always critical to follow the money, and either know what they really want to spend, or how much it's really going to cost YOU!

The latest case in point has been the efforts by the Village Manager and the current members of the Village Council to convince people that not only was a new Community Center a critical project for the village, but that early on the survey that was circulated to generate information that would support this project was critically misleading when it came to the claim they made as to what the costs to the residents would be if they were to support this project.

That misleading information without question caused some residents to support and embrace this project.

Here is the page from the questionnaire circulated by Ballard*King, the Colorado company hired without an RFQ by Village Manager Tom Benton. 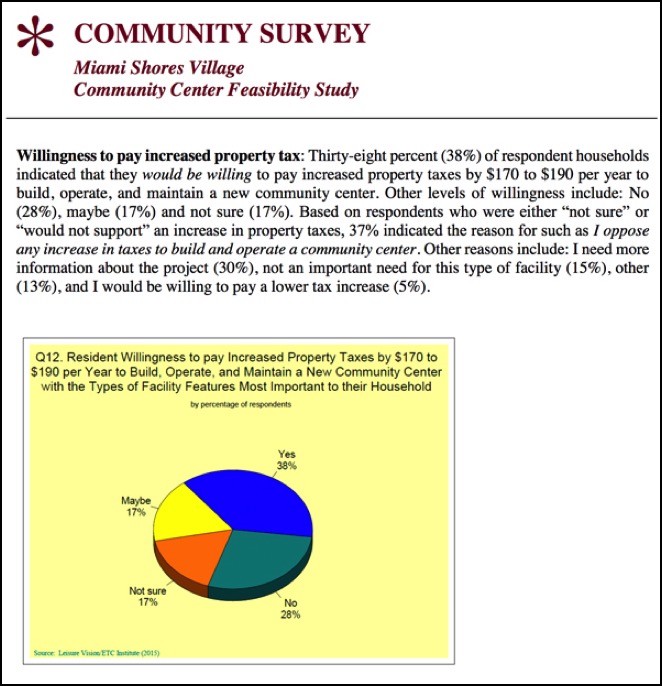 For anyone who deals with financial numbers including ad valorem taxes and operating costs - and certainly Village Manager Tom Benton is no stranger to these numbers - the $18 million in construction costs would have, should have prompted some quick math, that would revealed that there was no way that the costs to the average homeowner in Miami Shores would be $170 - $190 a year, even to cover the construction costs, much less to also cover the operational and maintenance costs.

The numbers for this project have been squirrelly from the very beginning, and the remain so today, in part because along the way, some of the financial costs have been excluded, and others have yet to be revealed.

Here are the examples.

So far, I've found 3 separate construction budgets prepared by Skanka.  The first one is dated January 9, 2016.

The additional $2,081,987.00 in architectural and permit costs, had they been included in the first two budgets would have taken them both above the $20 Million Bond total, and it's obvious that that's the reason why they were never included as part of these budget numbers.

There still continues to be no real accurate projections about operational or maintenance costs, and I've yet to see a breakout of the costs for the sewer hookup.

When you look at all of these numbers, it becomes apparent that from the beginning the financial numbers were manipulated to minimize the real costs of this project, and even with the latest projected budget that is included in the flier that the Village is sending out, the reduction in the size of the building from 67,612 sq/ft to 48,330 sq/ft, and all of the other cost reductions that Tom Benton claims he and his staff have done in response to the criticisms from residents who are upset about what they have been told so far, these latest numbers have only reduced the project construction costs by $405,180.00, while failing to provide the operational, maintenance and sewer hookup costs should cause at least some folks to wonder if Tom Benton needs to get a few remedial math lessons.

Today, the Village sent out an email with a link to a flier that they prepared, and will be mailing to every resident in the Village.  The Village manager flier claims that the flier is NOT a political endorsement of the $20 Million Bond referendum, but it's hard not to see it as such, especially given that once again it seems that there has been a conscious effort to manipulate the numbers so as to confuse and mislead everyone.

Here are the numbers in question. 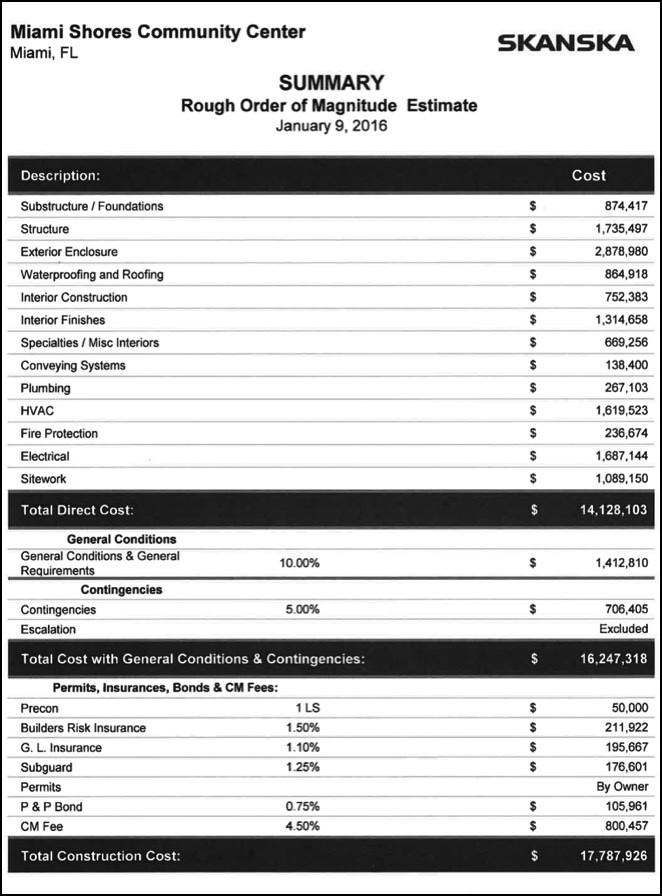 The 2nd budget, was the one above that was included in the Ballard*King Report and that budget came in higher, at $18,181,157.00, and DID NOT include PERMITS, INSURANCES, BONDS & COM FEES.

The 3rd budget is the one that is now being released by the Village as part of their this "does not officially endorse nor advocate any particular viewpoint regarding any ballot issue related thereto," but in fact does do just that, states that this latest budget is $17,382,746.00. 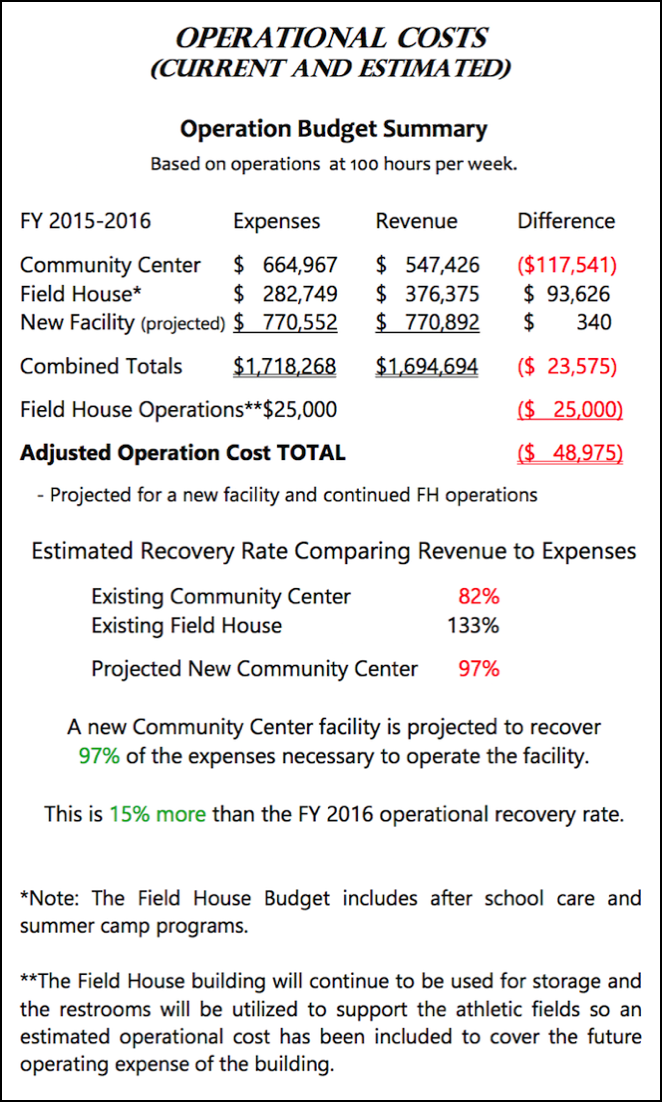 The only two numbers above that can be considered factual are the  expenses and revenue for the current Community Center and Field House.

Every other number in these so-called projections are unverifiable, and are not supported either by documentation or common sense.

Let's look at this as if we had a company and they had two different branches, one was called the Community Center and the other was called the Field House.

One lost money every year, and the other made money every year.  At the end of the year we would add the total of expenses and revenue from both branches, and whatever was left would be our  gross profit or loss.

So, that's what happened to our company this year. We ended operating with a -$23,915 DEFICIT.

(NOTE: If you look back at the numbers provided by the Village, you'll see that their projected DEFICIT was -$23,575. That's because, they included the imaginary projected profit from the "New Facility."

In today's world, those are called Alternative Profits, that go along with Alternative Facts.)

Now, we've decided that we want to change things by building a new, and bigger Community Center, and of course by doing this we hope that our new Community Center will make more money, and thereby reduce the current deficits we've been operating with.

BUT, AND THIS IS A VERY, VERY BIG BUT, in order to calculate your future expenses and revenue you cannot combine the financial numbers of the current Community Center and Field House with the projected numbers for your new Community Center, and then claim that by adding ALL those numbers together you're going to produce enough new income to decrease your deficit.

Secondly, because there is no information, supporting documentation or references as to where the projected Expenses and Revenue for this new Community Center came from, and given the way in which Tom Benton had dealt with the financial numbers up to now, there is no reason to believe that these numbers can be believed.

And thirdly, what whoever put this crap together either intentionally, or by gross ignorance has tried to use two apples and an orange to try and convince us that what we're looking at is a watermelon.

This is absolute craziness.

Not only does this not make math sense, but it raises very serious questions about the math intelligence or worse, the honesty of whoever put this crap together, because at a time when every effort should be made to actually try to explain what is actually going on here, this does nothing but muddy the waters and make things even more confusing.