STUPID IS, AS STUPID DOES

IF DONALD TRUMP WERE TO SEE STEVEN ZELKOWITZ'S VOTER REGISTRATION CARD, HE'D START FLAPPING THOSE LITTLE HANDS OF HIS AND CALL HIM A FAKE VOTER.  WHY? THE ETHICS COMPLAINT THAT I'VE FILED AGAINST MY PAL STEVIE EXPLAINS IT ALL

There's only one reason why Steven Zelkowitz has refused all year to reveal his "new" Miami Shores address, and it's not because of his moronic claim that his wife and teenage children have suffered any "trama" because I keep asking him to behave the same way that each and every Shores resident is required to behave when they stand up to speak at a Village Council meeting: Give us your home address.

Zelkowitz had been ducking and dodging all efforts to reveal his home address since former Councilwoman Yvonne Ledesma first asked Village Attorney Richard Sarafan in January of this year to investigate the rumors that Zelkowitz was no longer living in Miami Shores.

Things really got interesting when Zelkowitz's ex-wife Allison, responded to one of my Facebook posts about this issue by suggesting that I go and look at their divorce settlement.

I did and discovered that the original home address at 420 NE 95th Street, which is where Village Attorney Richard Sarafan claimed Zelkowitz had told him he still owned was not true. The divorce settlement revealed that Zelkowitz had signed away all rights to that house on August 18, 2016, and had physically moved out before that. 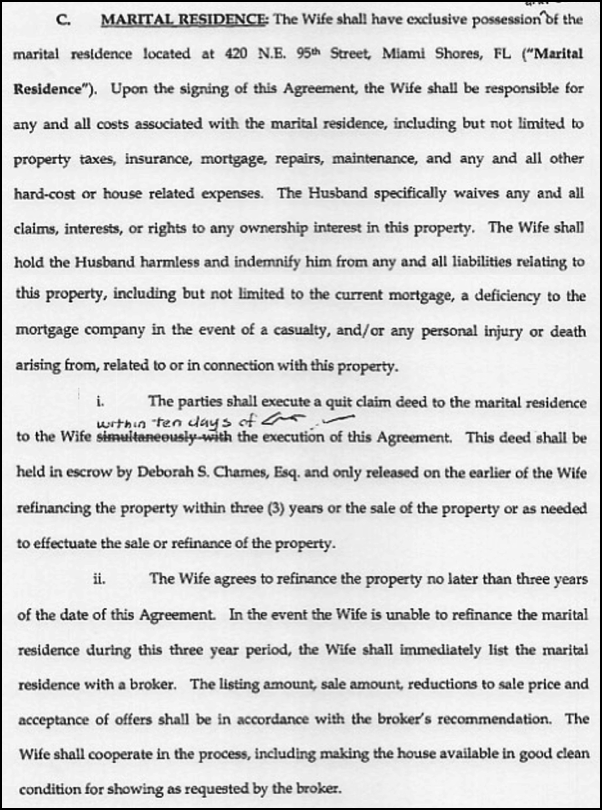 It was only after this revelation that I started going to Council meetings and asking Zelkowitz where he lived, and where he in return, not only refused to reveal his new Miami Shores address, but in one instance told me that it was,"None of your business."

How stupid is all of that?

His ex-wife and his children don't live with him. The only reason I ever decided to start asking him for his address was because it was his ex-wife, on Facebook no less, that had told me to go look at the divorce settlement, and that's where I discovered that the claims in Village Attorney Richard Sarafan's letter about Zelkowitz still owning his house was bullshit.

On Tuesday, following the suggestion of a friend I drove over to the Board of Elections and asked for the information on Zelkowitz's current voter registration card.

Well, wouldn't you know that Zelkowitz hadn't changed the address on his voter registration card since he first registered in 1999,  This is where this goes from a case of mopey by a moron to a possible federal case that would make Donal trump start waving those little hands.

As part of Richard Sarafan's letter to Councilwoman Ledesma, there appears this paragraph.

Sarafan's letter was written on January 24, 2017, which means that we  have every reason to believe that on November 8, 2016, Steven Zelkowitz was not only NOT living in Miami Shores, but that if he voted, he voted for candidates other than the ones that he would have been in titled to vote for had he been honest and changed his voter registration address.

One of those people who he would have illegally voted for would have been running for Congress, which makes this a federal case. Can you see those Trump hands waving now?

In reverse, if he voted in the April 2017 Village elections - again, living in a precinct other than one of the 5 that covers Miami Shores - that too would have been illegal.

The issues here are not just that Zelkowitz failed to change his address, because that is a case of mopery by a moron, but that by refusing to change his address, there exists the possibility that he engaged in Voter Fraud by voting for candidates other than the one's he would have have been entitled to vote for had he changed his address to reflect where he lived, and not where he wanted the residents of Miami Shores to think he lived.

What a tangled web we weave, when we first learn to deceive.

BELOW IS MY ETHICS COMPLAINT, ALONG WITH A COPY OF RICHARD SARAFAN'S LETTER, THE THE ZELKOWITZ DIVORCE SETTLEMENT