THE ABUSES THAT COME WITH A SENSE OF ENTITLEMENT

WHEN SELF-ENTITLED, DO-GOODER PRIVATE CITIZENS COME UP WITH AN IDEA FOR CIVIC IMPROVEMENT, THE FIRST THING THAT IS OFTEN IGNORED IS PROCESS, BECAUSE WHO, AFTER ALL WOULD BE FOOLISH ENOUGH TO OPPOSE CIVIC IMPROVEMENTS BY DO-GOODERS?

I want to be very clear at the beginning about what this story IS, and ISN't about.

This IS NOT a story about people going out and painting 98th street. I don't care, and I'm sure that are a lot of people in the Village who don't care if people want to paint one street in the Village, or paint them all, nor for that matter if the painting is done by residents, non-residents or a group of traveling Gorillas.

Nor is this a story that is in any way directed against the efforts of  a young fellow named Tony Garcia and his design firm Street Plans to involve people in urban design and by doing so in new and creative ways..

I listened to Tony on WLRN a few months back after he won a Knight Foundation grant explain what he was trying to do, and thought he was smart and actually committed to doing something positive for Miami.

Nor is this intended as an attack against any of the residents who in an act of community spirit and good faith want to go out and paint the street on Saturday.  For a family with kids, going out and painting a street is a good a way to spend an autumn afternoon as many other endeavors, and a lot cheaper.

I'm not opposed to any of those things. But that's not what's really happening on Saturday.  What the residents have been led to believe is not what's actually happening.  Oh, the street is going to be painted, but that's the distracting part of the Three-Card-Monti game that is going on with this so-called community event.

Once again, I find myself writing about the abuses of process that passes for municipal governance in our fair Village, and about a sense of entitlement that allows some folks who, because they think they have a good idea, should be allowed to make it happen without being encumbered by pesky requirements or following any sort of process so as not to piss off their neighbors.

What prompted this story was listening to a resident who lives on 98th Street tell the Mayor at the end of Tuesday's night's Council meeting that he and a bunch of his neighbors were upset over this project taking place on their street, just feet away from his home without adequate notification, and Mac Glinn responding that he really didn't know that much about what the resident was talking about.

In short, this is another in my continuing stories about Village Manager Tom Benton, and his almost pathological refusal to be open and transparent in both his decision making and in his communicating to the residents of this Village what is going on, and once again this is a story that involves those nice folks at the Chamber of Commerce who, like many groups seeking to validate their existence are always looking for the next project that will make them relevant.

We have to take Mayor Mac Glinn's word when he said he didn't know much about what the resident was talking about because the decisions leading to this Plaza 98 event on Saturday, or the subsequent monthly events that are supposed to follow were never presented to the Village Council for discussion or approval, nor were they even part of a Village Manager's Report at any Council meeting. Of course, Tom Benton seldom if ever gives reports at Village Council meetings, but that's another story for another day.

From what I've been able to piece together, Tony Garcia, working with the Miami-Dade Country Department of Transportation came up with an idea to fund a number of short-term projects that might otherwise take years to get off the ground.  Here is the press release issued by the county that provides a better explanation. 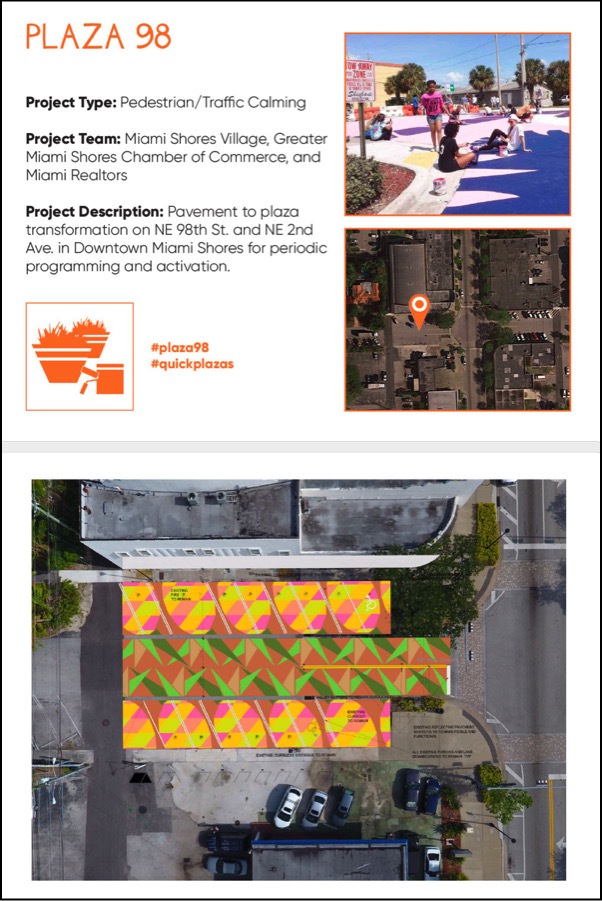 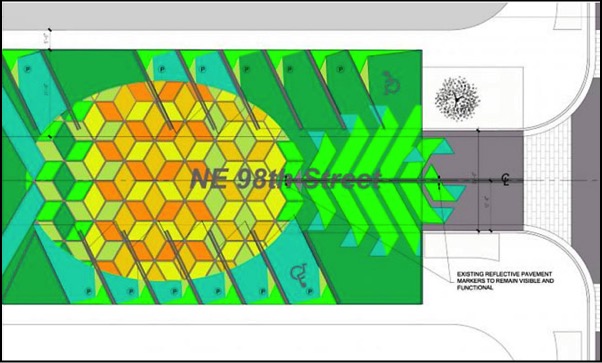 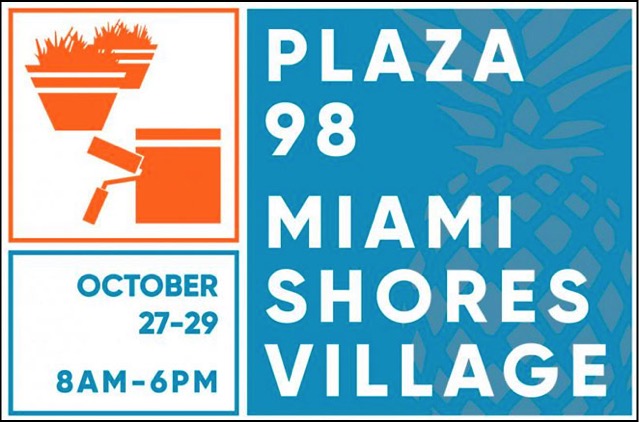 The application process for a grant was rather simple - an online application consisting a half dozen or so questions - and the Chamber submitted a proposal that claimed that it was being submitted as a joint project by the Village of Miami Shores, Miami Shores Chamber of Commerce.

68 proposals were submitted, and 18 were selected. Here is the screen grab of the Miami Shores proposal. You can see all of the winners HERE.

As you can see, the proposal was to paint the street in bright colors, although the design has changed and now it's supposed to be paint to look like this. 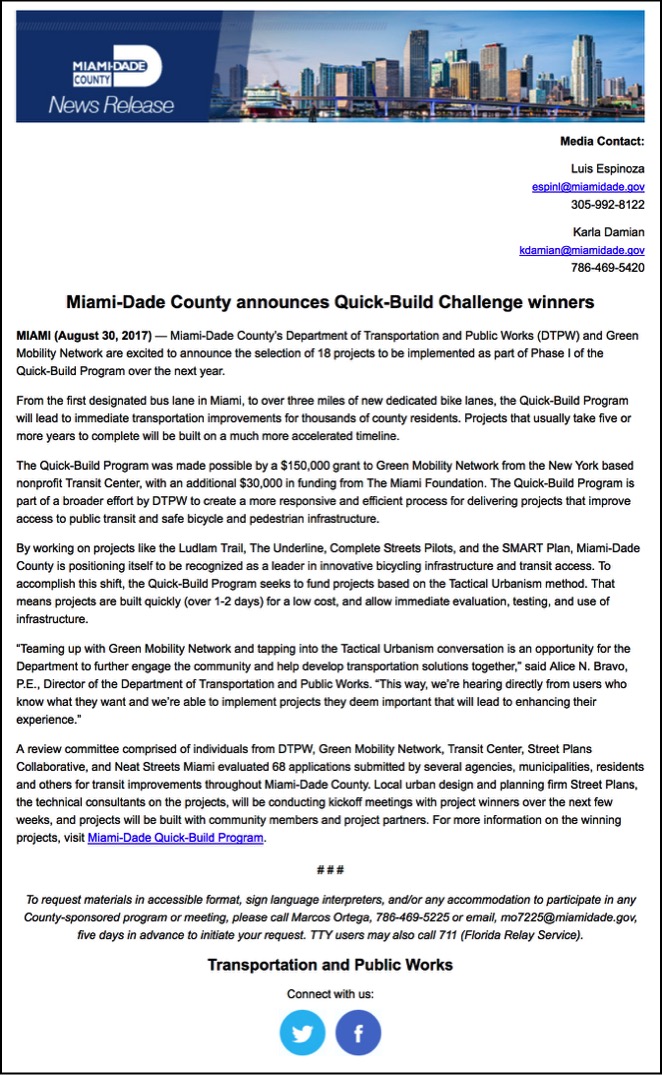 You're probably asking at this point, who could be opposed to painting this colorful Pineapple on 98th Street?

That's a good question, but it's the wrong question.

The first question that should be asked is if this project is billed as a "Pedestrian/Traffic Calming," project, who made the decision that 98th Street was in need of pedestrian and traffic calming? Why that particular street, and why the portion on the Westside of NE 2nd Avenue and not the Eastside?

So, I'm going to go out on a limb here and say that this really isn't a project about pedestrian and traffic calming, because other than the school buses that line up to drop off and pick up the school kids who are bused in to see the shows at the Theater, there isn't, and has never been a problem with pedestrians or traffic on that street.

In fact, this project really isn't about traffic calming at all, it's about something else entirely.

Below is a screen grab from the Miamism blog written by Ines Hegedus-Garcia, a local realtor, whose one of the folks who have prominently been promoting this project on Facebook pages, like Miami Shore Village Community.

Instead of traffic calming, Ms. Hegedus-Garcia is actually talking about  converting this portion of 98th Street into a "Community Gathering Space," and more importantly into a "living street."

Were any of the folks who live on 98th Street informed about this?  Were there any community meetings? Was the Village Council made aware of this?

Of course not. That's why the resident showed up at Village Hall pissed over the fact that the way he found out about this little scheme was through a letter that the Chamber of Commerce circulated to the business and property owners on NE 2nd Avenue. 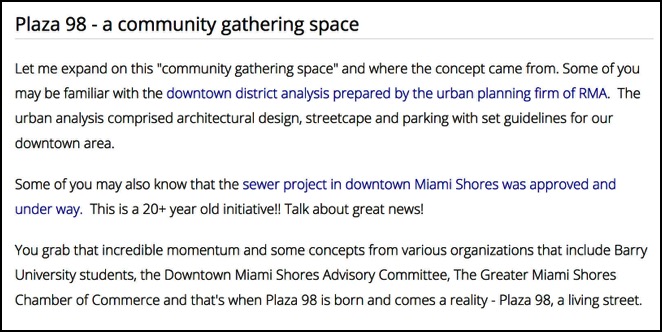 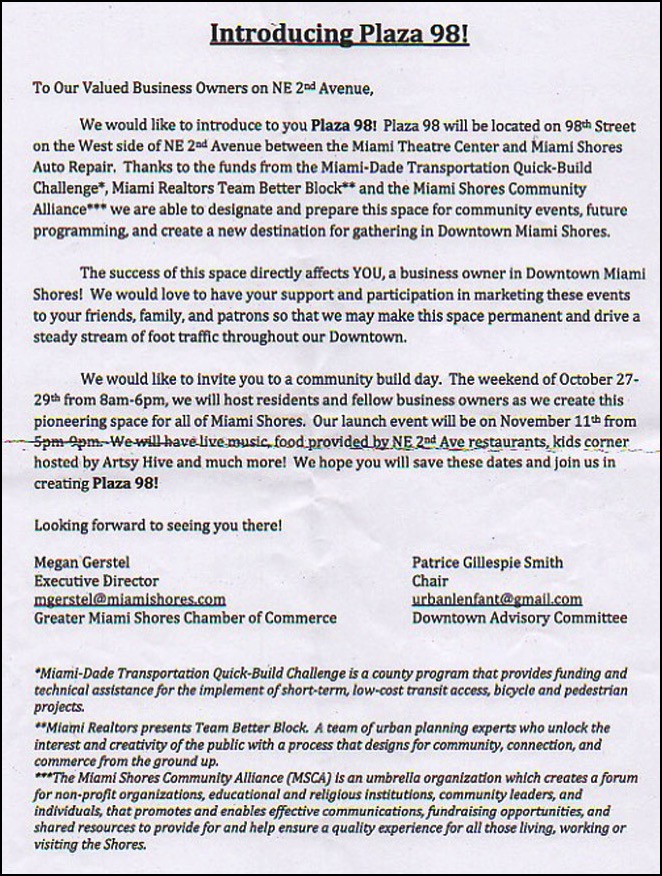 How would you feel if you got a chatty letter, passed out like a flyer informing you that the street that you lived on was going to become a an event space, and more importantly, it was intended to turn your street into  a thoroughfare, "to drive a steady stream of foot traffic throughout our downtown."

Who writes stupid crap like this?  Even worse, who comes up with an idea like this without bothering to actually talk with the people who will be most affected?

IT ACTUALLY GETS WORSE

You will recall that this project was supposedly proposed as a joint venture between the Village of Miami Shores and the Greater Miami Shores Village Chamber of Commerce.

Well, we have no evidence that anyone in the Village, including Tom Benton actually approved this scheme, but even if he did, the project is not a Village project. The street is not being paint by Public Works employees on Village time.

This project is the brainchild of the Chamber of Commerce, along with Ms. Hegedus-Garcia and a hodgepodge of other folks belonging to civic and no-profit groups, and they are the ones who are actually in charge of organizing this event and painting this street.

Is short, for legal purposes, this is a venture being underaken by one or more non-profit, private groups on public property.

If you, or I, or say a film company were to decide to do the very same exact thing that is going to take place on 98th Street on Saturday, we would be required by the Village to get a Special Events Permit, we would have to submit a Certificate of Insurance making sure that the Village was held harmless, and we'd also have to pay a Permit Fee, and most importantly of all, we would have been required to have someone walk from door to door in a radius of 500 feet of where the event was taking place and provide every property owner with a written explanation of what we were going to do, including the What, When and Where, and we would have been required to get the property owners to sign a form attesting that they had been informed.

In addition, because this will require blocking off a Village Street for upwards of 10 to 12 hours, we would be required to hire Off-Duty Miami Shores Police to provide security and traffic control.

Here is what I was told by the Village Clerk and the Chief of Police when I asked them if any of these requirements had been met by the private non-profit corporation legally responsible for putting on this event. 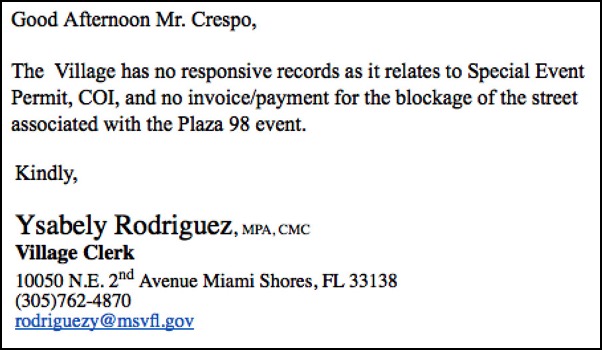 So, on top of being misled about the actual purpose of this little street painting project, the most basis of community organizing requirements were not followed, and if some moron decides to take a turn onto 98th Street for whatever reason and runs over somebody painting the street, or anything else bad happens, we, the residents of the Village will be liable through the Village's insurance for whatever damages are accrued.

Additionally, since there will be no Off-Duty cops providing security, that means that On-Duty police will have to be provided, and a couple of them will have to be there all the time, which means that those cops will either have to come in on overtime to provide that security, or regular police protection will be compromised because those cops will not be able to do their regular jobs and provide security at the same time.

In short, my fellow residents, what we have here is just another example of folks who, no matter how well intentioned they believe their schemes are, continue to believe - and no doubt they are encouraged to believe this thanks to Tom Benton - that when it comes to treating the Village as their petrie dish for do-gooder community activities, they can do what they want without a worry about process or procedure, even if it involves misleading residents and ignoring their rights for the greater good.

It's just another day in the Village By The Bay!