IN MIAMI SHORES, THE VILLAGE COUNCIL, THE VILLAGE MANAGER,  AND NUMEROUS RESIDENTS WANTED TO DEFLECT BLAME FROM THE DECISIONS THEY MADE, OR FAILED TO MAKE THAT CAUSED MUCH OF THE LOSS OF ELECTRICITY.  TO DO THAT, SOME RESIDENTS CLAIMED THAT THE FP&L FRANCHISE AGREEMENT MADE THEM RESPONSIBLE FOR TRIMMING THE VILLAGE TREES BEFORE AND AFTER THE STORM, WHILE THE COUNCIL BLAMED FP&L FOR"NEGLIENCE AND MISCONDUCT"  FOR NOT GETTING ELECTRICITY BACK FASTER.  LIKE SO MANY OTHER STAEMENTS   THESE CLAIMS DO NOT STAND UP TO THE  LANGUAGE OF THE AGREEMENT, OR TO THE FACTS AS THEY OCCURRED 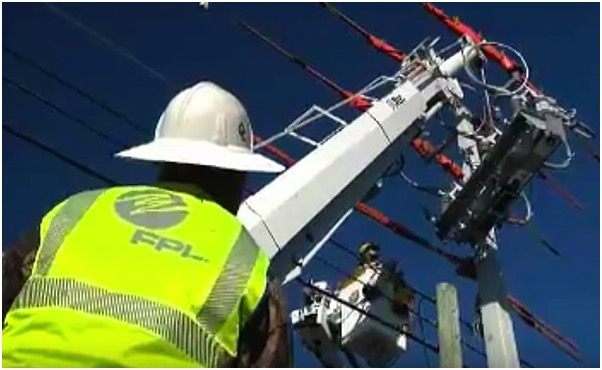 Contrary to the opinions or comments of some residents, the FP&L Franchise Agreement does not spell out, or include any language that details it's responsibilities or obligations to the pruning or removal of trees in conjunction with hurricanes.

The Franchise Agreement is actually an agreement between the Village and FP&L that allows FP&L to have a non-exclusive right to "construct, maintain and operate facilities essential to the provision" of electricity to the Village, and the payment of fees to the Village for that right.

In short, this agreement is mostly about money: the money that FP&L will pay to the Village as a condition for it to operate it's largely monopolistic business in the Village.

Here is the agreement, followed by a copy of the latest payment statement from FP&L to the Village that shows that we make a sizable amount of money from FP&L.

While the agreement does not include specific language detailing requirements for dealing with trees before or after hurricanes, it is understood that the provisions requiring "maintenance" of the lines and poles implies that FP&L had, and has a clear and direct responsibility to do everything it can to protect it's infrastructure through pruning and/or tree removal.

At the same time however, the requirements placed on FP&L are contractual, while for the Village of Miami Shores, the requirements that it imposed on itself in 2005 when they approved Article III, Section 8-23 of the Village Charter detailing the responsibilities of residents and the Village Manager and Director of Code Compliance in "Protection of Electric Power Lines" carry the weight of law.

It was the refusal of Tom Benton, the Village Manager to carry out his responsibilities - evidenced by the tons of tree limbs, branches and even trees hauled away from streets and alleys after the storm - that have been at the core of several of my stories now about the continued incompetence and failure of the Village Council to exercise it's responsibilities to oversee the management of the Village in a competent and responsible manner.

Once again, here is a copy of  Article III, Section 8-23 of the Village Charter that spells out what should have been happening for the last 13 years when it came to insuring that the Village was actively working to protect its residents from undue and unnecessary loss of electricity because of a failure of residents to prune their trees.

FP&L is a rapacious bully.

It takes our money, and what it doesn't syphon off in huge profits it uses in part to pay for expensive lobbyists and lawyers who in turn try and get even more money from us with a bought-and-paid-for Public Service Commission, and with legislators in Florida who have never been shy about dropping to their knees to do whatever FP&L, the Florida sugar barons, Disney, Universal Studios and a handful of other giant companies want.

There are any number of legitimate reasons why the average resident in the communities that FP&L serves has a right to be pissed about their behavior, BUT, while we have both a right and an obligation to speak up about the way that FP&L operates, the fact remains that for the most part they were able to restore power to an overwhelming number of their customers in a far shorter period of time after Hurricane Irma than they had for any previous hurricane.

Could it have been even faster in some situations? Absolutely. I, and my immediate neighbors went an extra 2 days without electricity because of a dumb failure of communication between FP&L and the out-of-state company that was assigned to retore power in our part of the Village.

Shit happens, and that was an occasion when it did.

Shit happens a lot during natural disasters, and it's a sign of real leadership when politicians trying to solve problems recognize that sometimes the best laid plans of mice and men don't always work the way they are supposed to without attempting to shift the blame to others, or worse, to pander by making bogus claims and statements as a way to deflect attention from their own failures.

In the aftermath of Irma, the political leaders of several of Miami's richest communities - communities like Coral Gables, Pinecrest, the City of Miami's Coconut Grove District  and Miami Shores - all communities with  concentrations of wealthy, self-entitled residents who are vocal about their tree canopies and where these tree canopies had been allowed to grow for the last 13 years for the most part unpruned - were quick to ignore the failure of their residents to take care of their trees, and instead quickly climbed on ricky soap boxes to bemoan the failure of FP&L to retore electricity fast enough so as to silence the whining of their most self-entitled residents.

In Miami Shores, the Mayor and members of the Village Council sent a letter to FP&L expressing their dissatisfaction with the caliber and quality of service and threatened to sic our part-time, and occasional unelected 6th Village Council member Richard Sarafan, aka, the Village Attorney on them.

There is no small irony that among the letter's claims was this accusation of a failure by FP&L employees and contractors to do their job in a competent and expeditious manner:

"We personally observed idle crews in our community awaiting work

orders or other directions from supervisors who were simply not

adequately and responsibly applying the resources at hand."

This from a Village Council where 4 of the 5 members were never seen or heard from either before, during and most especially after the storm either on social media or in person beyond their immediate neighborhoods, and whose failure of oversight, or demand for answers as to why the Village Manager didn't order sand or sandbags before the storm, or ice and water after the storm, or why and how the Miami Shores Public Works Compound was robbed of at least $9,921.28 of tools including a chainsaw, trees trimmers and other landscaping equipment on the Friday night before the storm, are all evidence of a subsequence on their part and a failure to look out for the best interests of the residents that is actually quite shameful.

The documents that I have been able to obtain to date about the Public Works Compound theft do not paint a comforting picture of competence or accountability on the part of the Village Manager or the Council as it relates to the security at this compound, which one Village employee described to me, is little more than a pawn shop for folks in the neighborhood who break in on a regular basis to steal tools and equipment. There will be more on this story when I am finally able to obtain public records that are either in a bureaucratic sinkhole, or mysteriously difficult to locate. 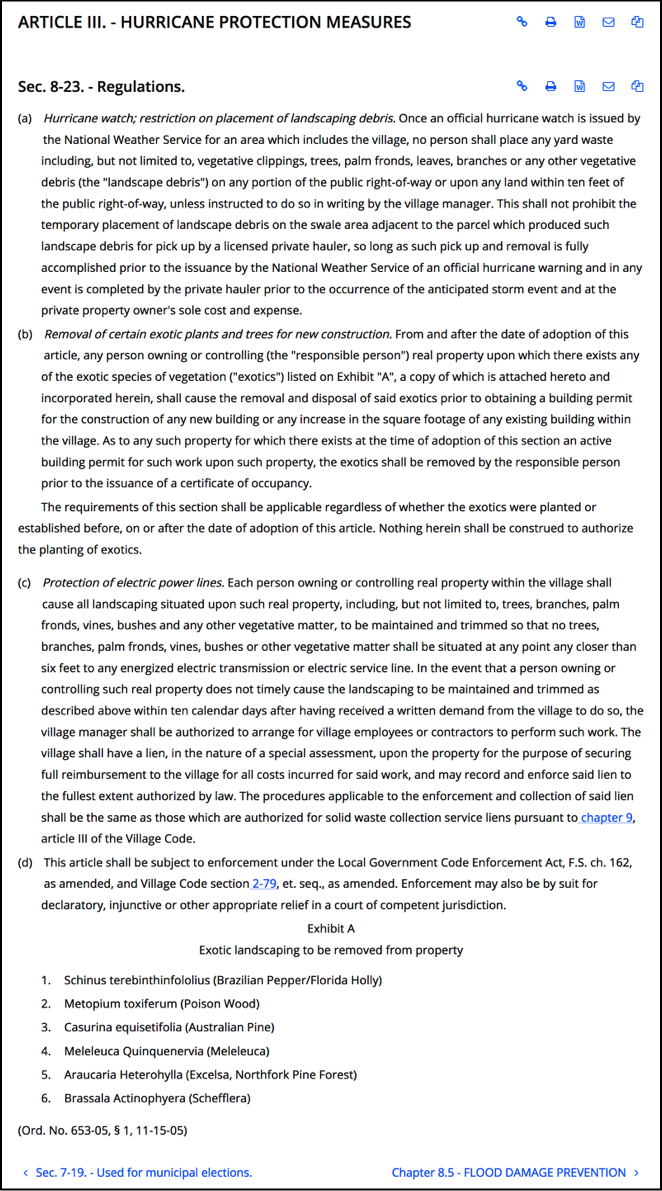 Last night, in response to my Crespogram Rant, Mary Benton responded on Next Door by writing:

in public spaces and private yards in MS. I think most people

are inattentive and unschooled on when and how their trees

should be pruned, and they'd be happy to learn."

I certainly agree that such conversations should take place, because clearly many people are clueless about their trees and their responsibilities.

However, any such conversations have to be based on a recognition that the days of massive trees overhanging houses and the alleys along which so much of our electricity is transmitted have got to come to an end.

As for the silly nonsense in the threatening letter sent by the Mayor and the Village Council to FP&L, the piddling crap that is supposed to pass for legal grounds underscores just how little competence or attention these people are actually exercising on our behalf.

To threaten a lawsuit based on antidotal observations of workers supposedly waiting for work orders, or to miss a "second, self-announced deadline" to restore power, when in fact the evidence is overwhelming that not only did the Village not fullfil it's obligations to prune it's trees before the storm, but after the storm claimed, as Tom Benton told me personally that the Village was not responsible for clearing the alleys so that the crews could get in to repair the electric lines is just absolute bullshit of the first order.

It's true that we only pay these Council members $1 a year, but from their behavior, I think that even at that they're screwing us out of money! 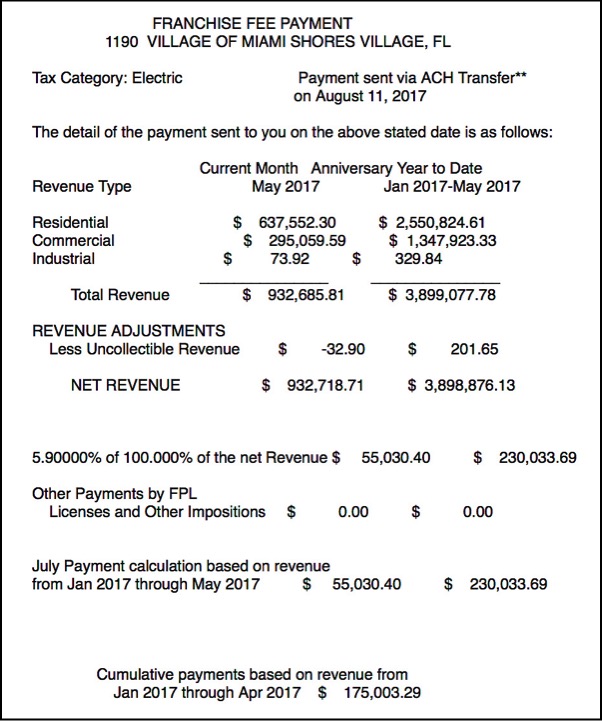