ALMOST A YEAR AFTER I WROTE ABOUT THE ACCUSATIONS OF CHILD MOLESTATION AGAINST JEROME STARLING, HE'S BACK  RAISING MONEY FOR THE RICKIA ISACC FOUNDATION AND CLAIMING THAT FRANCIS SUAREZ IS ONCE AGAIN LEADING HIS HOST COMMITTEE - WHAT THE FUCK IS UP WITH THAT FRANCIS?

THE MAYOR AND THE ACCUSED CHILD MOLESTER

On January 2, 2017, I published a detailed story about Jerome Starling, a local "street preacher," who had founded the Rickia Isaac Foundation in honor of his 5 year old niece who had been killed by a stray bullet fired at the end of the Martin Luther King parade in 1997, and who had been accused by the victim of molesting him when he was a runaway boy from the ages of 12 to 17.

In my January story I included a typed version of the original letter of complaint that was sent to the the State Attorney's Office in September of 2013, that prompted a criminal investigation conducted by the City of Miami Police Department, and the Close-Out Memorandum on the case where the detective who wrote it stated that there was "probable cause" to believe that Starling had committed the crimes he was accused of.

Here are copies the the complaint and the portion of the Close Out Memo. The original documents can be viewed HERE. 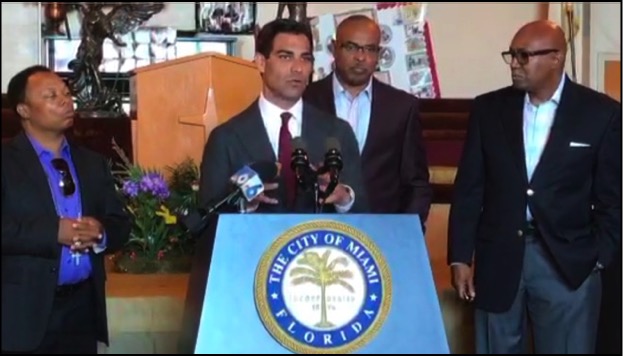 This letter is  a carbon copy of the letters that Starling has circulated in past years including the instructions to send the checks to Starling's home address.

At a time of heightened awareness and concern about sexual assaults, sexual harassment and child molestation, the very idea that the Mayor of Miami - and the father of a 3 year boy - along with the Chief of Police whose detectives concluded that there was "probable cause" to believe that "Reverend" Jerome Starling had indeed abused a 12 year old runaway, would, having been made aware of this information, once again allow their names to be attached to a fund raising letter of this foundation created by Starling, and that directs the checks to be sent to his home address, should make everyone in Miami say, "What the fuck's up with you people?  Don't you have any moral values at all?"

It would seem that Miami joins Alabama as places in America where you can you find politicians, including in this case a school board member, a state senator, a state representative, the Mayor of Miami and the police Chief along with the Mayor of Miami Gardens cozying up to an accused child molester without blushing, and the only city where the local news media thinks that this is not a news story.

NOTE: The Rickia Isaac Foundation founded by Starling, has changed board members over the years, and is now led by Anthony Stanley, who Starling has identified as his "nephew" on his Facebook Page. Starling's name does not appear as a board member in the corporate papers.

His name does appear as the president in the corporate paperwork for No More Stray Bullets Foundation, where Anthony Stanley is listed as the Vice President, and where the address for the corporation is Starling's home address at 568 NE 71st Street.

There are no records of tax returns filed for either of these foundations since 2014.

The Reverend Jerome Starling, at the left, looks on as then City Commissioner Francis Suarez talks about the City's victory in the US Supreme Court over the predatory lending practices in minority communities in May of 2017. 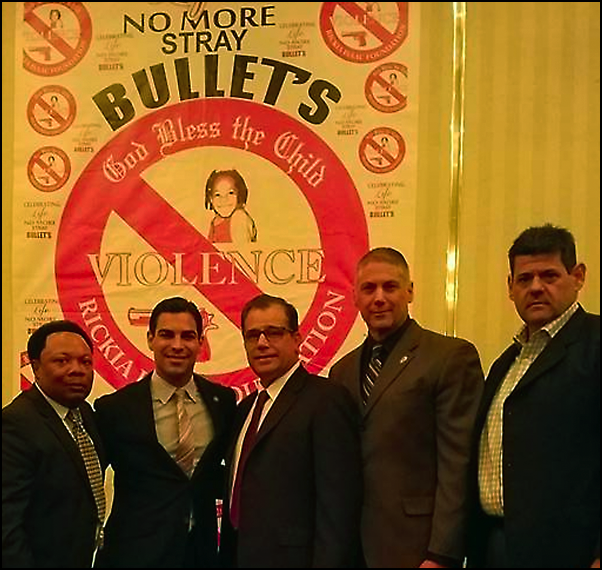 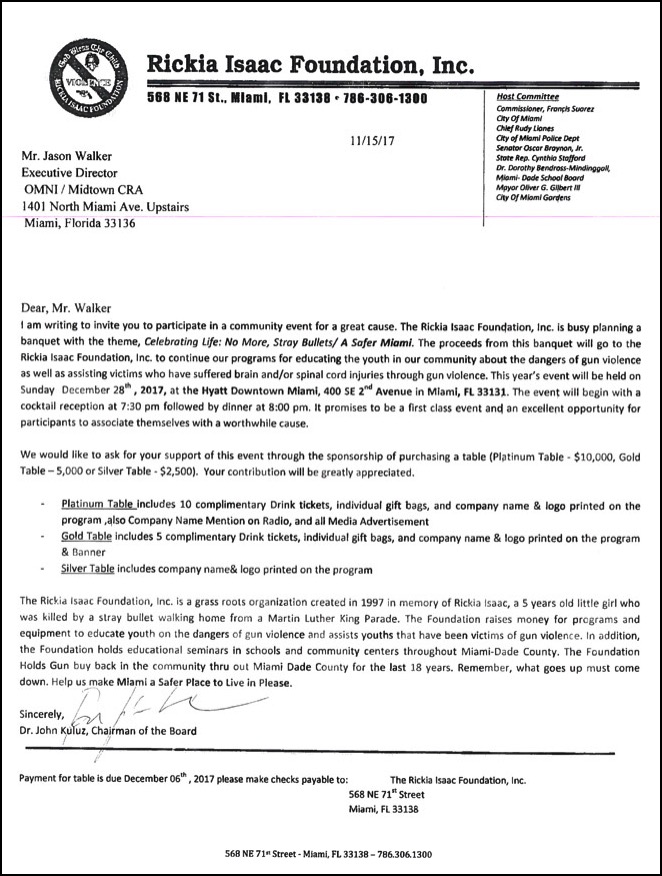 "On December 19, 2013, at 830 hours ASA Laura Adams, of the Sexual Battery/Child Abuse Division, reviewed this case file. The facts of this case have  established probable cause to believe that Jerome Starling committed the crime of Lewd and Lascivious Behavior as described by (NAME DELETED) positively identified Jerome Starling as the offender. Jerome Starling can be located and arrested at this time. but for the fact that ASA Laura Starling states that her office will not be able to prove the case beyond a reasonable doubt, due to insufficient evidence, the statute of limitations and the victim's delayed disclosure. In addition Jerome Starling is a person of notoriety and wealth and is well known in the community. The victim (NAME DELETED) has no credibility as a person convicted of murder and sentenced to life in prison.

Therefore, this case is closed  an ECA."

My story however, was more than just about the allegation of child molestation against Starling, it was also a detailed look into the failure of both of the  foundations that he had formed to exploit his niece's death to file tax returns for multiple years - something that continues to be occurring after a fruitless effort to find recent copies of any Form 900's that these corporations in advance of writing this story - and the discovery that the City of Miami, including the Downtown Development Authority (DDA) and the OMNI CRA had given the Rickia Isaac Foundation a total of $63,500 of public money that had never been accounted for. You can read that portion of this story HERE.

Starling never lacked for support from the politicians at City Hall. During Commissioner Marc Sarnoff's time on the Commission he had been Starling's biggest supporter, arranging for the city to give the foundation a $25,000 grant, and in 2015, when his wife ran for his Commission seat, Teresa embraced Starling and his foundation making sure to attend one of Starling's press conferences and posing with her husband for a photo op. 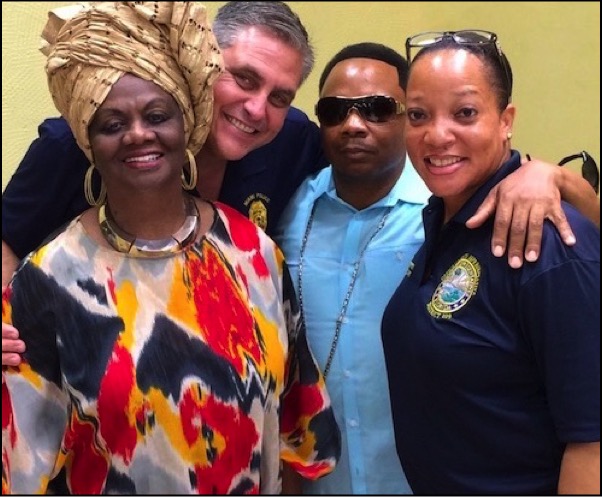 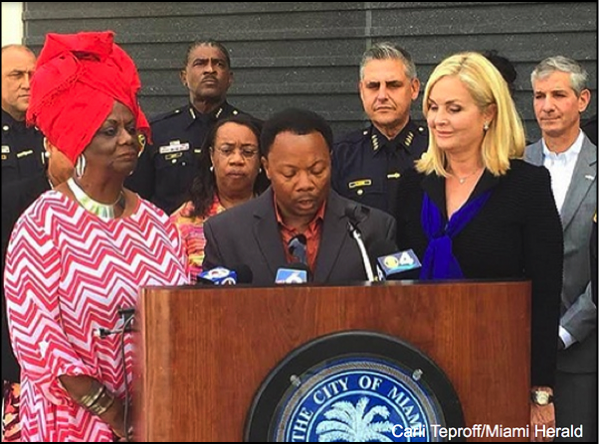 And it wasn't just City Hall folks who had no problem associating with Starling and posing for photos with him, as evidenced by the below photo of Miami Police Chief Rudy Llanes, Miami-Dade School Board member Dorthy Bendrass-Mindinghall and State Representative Cynthia Stafford happy to pose with Starling..

Many embers of the police department were appalled when this photo was made public showing the Chief draped over Starling like a cheap suit, given that the detectives who conducted the investigation and came away believing Starling had had committed the crimes were from his own department, and that this information had been known and shared internally for almost a year before I was tipped off about it.

My January story also focused on the annual gala fund raiser that the Rickia Isaac Foundation held annually at the Hyatt Hotel in downtown Miami, and how then Commissioner Francis Suarez had not only attended, but more importantly had allowed his name to be used as a member of the Host Committee.

Even though I could find no evidence of Suarez actually giving money to this foundation, I was told that he personally called people asking them to donate money.

On January 11, 2017, Francis Suarez went to my blog, and linked on my story about Starling.

I can't say that Francis Suarez read my story, but neither can he claim that he was unaware of my story, and therefore he cannot at this point claim that he did not know about Starling and his alleged behavior - both the child molestation AND the financial mismanagement - in the time since then.

Shortly after the publication of my story, the Miami Police Department ended their relationship with Starling's foundation to sponsor Gun BuyBacks, and joined with The National Gunsense Coalition to conduct the Gun Buybacks.

In many cities that would have been the last time anyone heard about Reverend Starling, but this is Miami, where there is no shame, and where the politicians at Miami City Hall check in their ethics and morals when they walk through the door.

So, it was no surprise when I saw the letter below on the desk of an agency director which I learned had been hand delivered  looking to raise  money for the Rickia Isaac Foundation's next gala fund-raising event to be held on December 28th, at the Hyatt Hote in downtown Miami.

You will see that both Francis Suarez and Police Chief Rudy Llanes are again at the top of the Host Committee.

" Good day!  I would like to report & press charges against Rep. Rev Jerome Starling for sexual assaulting me for years. Since I was 12 years old unto I was 17 years old. I really don't know how to go about doing this I'm very tired of suppressing it acting like it never happened. So I'm just gonna let it come out like it do I'm not ashamed nor afraid anymore. It all started back in "1991" when I ran away from home due to my stepdad get drunk & put his hands on me. I was at the store "Top Value" by the mall omni when I first met Jerome he pulled up on his bike and ask me what I was doing outside this late by myself. I told him I ran away from home and he ask me why & I told him then he asked me where I stay at I told him. Then he told me he not leaving me in these streets like this by myself to get on the handle bars he took me to the store he said he owned on eleven street & 2ave with an older dude name Mr. Willie. He fed me and told me to tell Mr. Willie I was his (DELETED). Later that nite me and Jerome walked down the street to overtown metrorail and Jerome called a cab for us. We ended up at Bayside motel on 51 St and Biscayne Blvd. Once we was inside the room he told me to go take a shower he no I tired which I did. he was in one bed and I was in the other but when I woke up later that nite he was in the bed with me playing with my (DELETED) and his. I tried to get up he pushed me back down telling me to relax. I told him to stop. Then he made me take shower with him he was hugging me from the back grinding on my butt. When we got out the shower he told me if I told anyone he was gonna have me and them killed. That it aint really nothing wrong with (DELETED) playing with each other. I ended up staying with him and he spoiled me with video games cloths shoes. Its just so much more my life & mentally scared me. It's so much more and Im highly willing & desirous to show the world the monster Jerome Starling is. He got everyone fooled even Katherine Fernandez. Please send someone to talk to me. thank you."