We pay the Village Attorney a princely sum based on an hourly rate, and for that amount of money our legal documents should look and read so amazing that they could be entered for prizes and exhibited as examples of what good legal contract work looks like.

Here is the page from the Village Budget that itemizes the money earmarked to cover the Village Attorney's fees that shows the Mr. Sarafan is collecting between $200,000 and $300,000 a year for very little in legal work and a whole lot to pretend he's a member of the Village Council.

In addition, all government contracts should include a requirement for  audit and inspection rights, and I screen gabbed a portion of a recent City of Miami contract with a vendor that illustrates what that language looks like.

Although it doesn't always seem like I do, I have a method to how I go about looking at the activities of the governmental bodies and agencies I write about.

I generally operate much like one would in putting together a jigsaw puzzle.  My way of trying to make sense out of the chaos is often to bounce around on an agency's website looking at any and everything that's posted, so as to get some sense of what is going on, and more importantly how open and transparent the information that on the website is.

Last week, I noticed that whoever was responsible for posting the minutes of the Village's Golf Course Advisory Board hadn't done so since 2013.

That prompted me to submit a public records request to the Village Clerk asking her for both a list of the Advisory Board members, and copies of the minutes of their meetings.

I received the list of board members this morning, and shortly thereafter I received a copy of the minutes of their meetings for 2016. You would figure that before the 2016 minutes arrived, the minutes for 2014 and 2015 would have arrived.  They didn't.

In addition. Village Clerk Barbara Estep informed me that she was contacting the Country Club staff for these minutes, which makes me wonder why would the County Club staff be responsible for the minutes of a public board.  The recording of minutes of public boards are either the board's responsibility, or that of the Village, not the county Club's.

In addition, there hasn't been an annual Actuarial Valuation Report of the General Employees pension Plan posted on the Village website since 2013.

In addition, I could not find a section of the website where there were public notices of the meetings of ALL of the Advisory Boards posted.

Now, I don't want this to be seen as a criticism of the job performance of Barbara Estep, but rather an observation regarding the job responsibilities and requirements of her office, especially now that she is retiring and a new Village Clerk will be hired.

I believe that this failure to keep up with the posting of minutes and other documents is but a small window into a larger problem created by the fact that the City Clerk is also the designated Executive Assistant/Secretary for the Village Manager.

The needs and requirement of a Village Clerk have changed over time, and what might have been acceptable in years past, cannot be acceptable today especially when the 2017 Village budget has us paying $177,612.00 for the operation of that office.

In reviewing the video of several Council Meetings I heard the Mayor on more than one occasion inform that residents that she wanted them to refrain from repeating the comments or concerns expressed by other residents.

That's an infringement on what is considered content neutral speech. In the landmark decision Police department v. Mosley (1972), "Justice Marshall explained that "above all else, the First Amendment means that the government has no power to restrict expression because of its message, its ideas, its subject matter, or its viewpoint."

I don't wish to belabor this issue, but too often elected officials who think that the time that they must spend at public meetings is more than they're willing to devote to the public service they chose to give will try and tell the people who at best have 2 or 3 minutes to express their opinions, that even that is too much for them to bear if it means having to hear the same arguments or opinions over and over.

That's an abuse of the public's right to speak at public meetings, and it's one that should not be allowed or tolerated at Village Council meetings. If the members - including the Mayor - don't want to listen to the resident say what they have a right to say, then maybe they should resign.

THE VILLAGE ATTORNEY IS NOT AN UNELECTED MEMBER OF THE COUNCIL, EVEN THOUGH HE'S BEEN ALLOWED TO ACT LIKE HE IS, AND ESPECIALLY SINCE HE BILLS THE VILLAGE BY THE HOUR FOR SUBSTANDARD WORK PRODUCT

One normally expects to hear from a City or Village Attorney only when they're asked to comment on a legal question.

In Miami Shores, Richard Sarafan, the Village Attorney, interrupts and interjects himself into discussions of policy and from a review of the video tape of meetings seems to either be the ventriloquist for the Village Manager, or the guy in the old western movies who would always shout, "I'll head them off at the pass," whenever it appears that comments that might ruffle someone's feathers is made.

It's understandable that the Council members view themselves as a small town, perhaps even Mayberry kind of Village where a certain amount of informality is looked on as an effort towards congeniality, but the Village Council are the members of a board of directors of a Florida corporation with an annual budget of approximately $26 million.

That takes the activities of the Council beyond the behavior of a high school civic's exercise.

In the meantime, when it comes to doing the work that is expected of a Village Attorney, especially when it comes to reviewing legal documents and contracts and insuring that they contain all the legal boilerplate that protects the Village and the rights of the residents, his work product leaves much to be desired.

After 4, or 5, or 6  Amendments to the original 1990 lease contract with PCM, it should have become evident that a clean version of the contract needed to be drafted that reflected changes both the amendments and the changes in Florida Statutes and common usage contract language. It wasn't.

In 2014, the Village Manager signed a contract - described in the contract as an "agreement" - to hire Ballard*King to do a feasibility study for a new Community Center.

It is normal practice that when a government hires an outside contractor, the contract is written by the government agency.  In this case it wasn't.  In addition, it wasn't submitted to the Council for approval, but was done as a Purchase Order.  The document also doesn't show that it was reviewed for "form and correctness," by the Village Attorney.

The same situation occurred with the contract with Bermello, Ajamil & Partners, Inc. for the Community Center Recreation Center Project Elevations and Renderings.

This agreement was even less specific that the Ballard*King agreement, and both failed to incude specific provisions for Florida Statute 119.0701.

THE VILLAGE OF MIAMI SHORES IS MANAGED MUCH LIKE A HIGH SCHOOL STUDENT GOVERNMENT ONLY WITHOUT A LOT OF ATTENTION TO TRANSPARENCY AND LEGAL ACCOUNTABLITY, AND AT A STAGERING COST CONSIDERING WHAT WE'RE GETTING FOR OUR TAX DOLLARS - HERE ARE SOME EXAMPLES 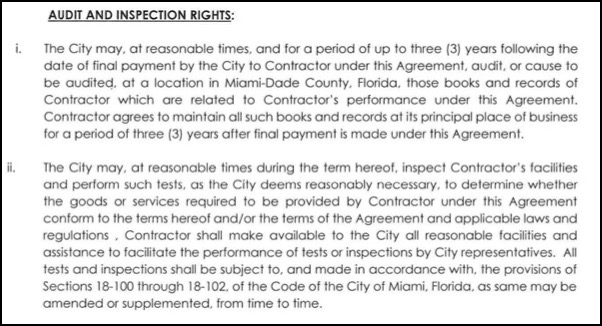 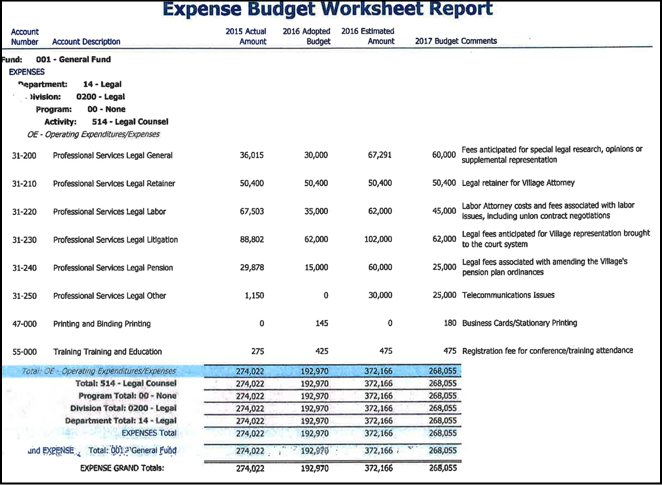 This is the first of what I suspect will be occasional commentaries of the quality and caliber of the work product coming out of Village Hall, because I'm one of those funny people who expects value for my money, and competence from my public officials.