On Friday morning, before I broke out a magnifying glass to read line by line the minutes of every Council Meeting between January 19th and April 16th searching for a mention of the item was bought before the Council for approval, I sent the Mayor and the members of the Council an email letter questioning how the Manager could have purchased the property without their approval.

It was only after Council member Glinn  wrote me back insisting that they had in fact voted to approve the purchase, that I went back looking for the item, which I found in the February 2nd minutes.

That discovery prompted me to write the Mayor and the Council members a second letter.  Here it is.

ON APRIL 16, 2016, THE VILLAGE MANAGER PURCHASED THE FORMER CATHOLIC CHARITIES BUILDING FOR $1.1 MILLION DOLLARS. HOW THIS HAPPENED RAISES QUESTIONS ABOUT PROCESS AND ABOUT HOW THE MANAGER AND THE VILLAGE ATTORNEY TREAT THE MEMBERS OF THE VILLAGE COUNCIL AS MUSHROOMS, WHO UNFORTUNATELY FOR THE RESIDENTS, ARE ALL TOO WILLING TO GO ALONG IN BEING KEPT IN THE DARK AND FED CRAP

In addition to his verbal presentation Benton had also prepared a memorandum for the Council members.

One of the things that happens when public officials stay in office to long is that they start believing that they can do or get away with anything.  Tom Benton has been the Village Manager since October 1998, and before that he had worked for the Village for 26.5 years as the Assistant Village Manager, Director of Public Works and as the Recreation Director.

During those years, Benton seems to have gotten away with a lot.

In my first story last week, I detailed how he managed to screw the residents while favoring the company that currently has the lease to manage the country club and gold course.

In today's story, you will see how Benton along with Richard Sarafan, the Village Attorney - who often seems to be acting as his ventriloquist - orchestrated the purchase the Catholic Charities building at 9900 NE 2nd Avenue for $1.1 million dollars.

THE ITEM COMES UP FOR DISCUSSION

This all started on January 19, 2016, at the largely unattended Council meeting where Benton bought up a discussion item about the possibility of purchasing the building.

Here is how the minutes of the meeting describe what happend.

Let me amplify on two of the issues I raised in my letter.

No self-respecting government that operates with transparency goes into a land deal without first having gotten an independent appraisal of the property. They do so for several reasons.

The first and foremost reason is so that they can have an independent fair market value of the property to both guide them in negotiations, and secondly to protect themselves against any accusations of insider dealing, or paying more than the property is worth.

In this case, given the past performance of Tom Benton and Richard Sarafan when they negotiated the deal with PCM that screwed the residents out of a minimum of $585,980.60, there is more than ample reason to question their negotiating skills when it comes to looking out for best interests of the residents.

I don't think I'm out of line in saying that I wouldn't trust these guys to negotiate a rental contract with kids wanting to put a lemonade stand on the lawn of City Hall without an outside, independent analysis of the contract, especially when a review of the Miami-Dade County Appraiser's folio page on this property shows that their market value estimate on this property was $766,970.00.

Echoing the language in Benton's memorandum the motion that Vice Mayor Steven Zelkowitz made also called for a contract proposal to be provided the Council.

"I make a motion to authorize the Village Manager

and the Village Attorney to negotiate with the Archdiocese

and bring back a contract for purchase back to the Council

What did happen is that at the end of the February 2, 2016 Council meeting, Village Attorney Richard Sarafan asked to speak and stated that he was introducing an Emergency Item because he and the Manager had negotiated a deal for the Catholic Charities property and because, "there was a short time line," they wanted the Council to approval them moving forward.

He then asked for the Council to approve finalizing the deal for a price of $1.1 million.  (You can see the videos of both the January 19th and February 2nd portions of the Council meetings by clicking HERE.)

There was no discussion or reference to any copy of a, "contract for purchase," of for the proposal that Benton had promised to bring to the Council, nor for any document that included, "the total costs as well as the recommended financing for this project."

Instead, an item or issue that should have been presented to the Council by the Village Manager - he is after all the Chief Administrative Officer of the Village and responsible for it's operation - was introduced by the Village Attorney at the end of a meeting as an Emergency Item, and faster than a contestant in the Batchelor can get out of a slinky dress and into a bikini - the members of the Council, with no documentation to rely on, or without asking a single substantive question, including any questions as to where the money for purchasing the property was coming from, pliantly followed the Village Attorney's instructions to support his request for a  Resolution approving the deal, and then a separate vote authorizing him and the Village Manager to finalize the deal.

If this is the level of representation that the current members of the Council consider adequate, then we can do as well with trained monkeys. I take that back, even stupid monkeys would work just fine.

When I first started looking into this issue, I came to believe that Benton had purchased the building without getting any approval from the Council, because I looked at the Agendas and the Meeting Minutes, and not finding any mention of an approval I mistakenly assumed that that is what had happened because I assumed that the item would have been treated as a regular item,  and therefore would have been clearly identified in both the agenda and the minutes.

Instead, not only was the item was introduced as an emergency item at the very end of a contentious discussion about the Charter School at the february 2nd meeting, but worse, it was all but hidden in the minutes.

Below is a screen grab that I did of the minutes that are on the Villages's website as you see them.  You can see how difficult it is to spot this item, because unless you are actually looking for a menton of this issue, it looks like the discussion of the purchase was just a part of the discussion dealing with the Charter School.

At best, I would argue that this is another example of a lack of attention to detail in the preparation of the Minutes, and at worst this was an item that was hidden in plain sight. 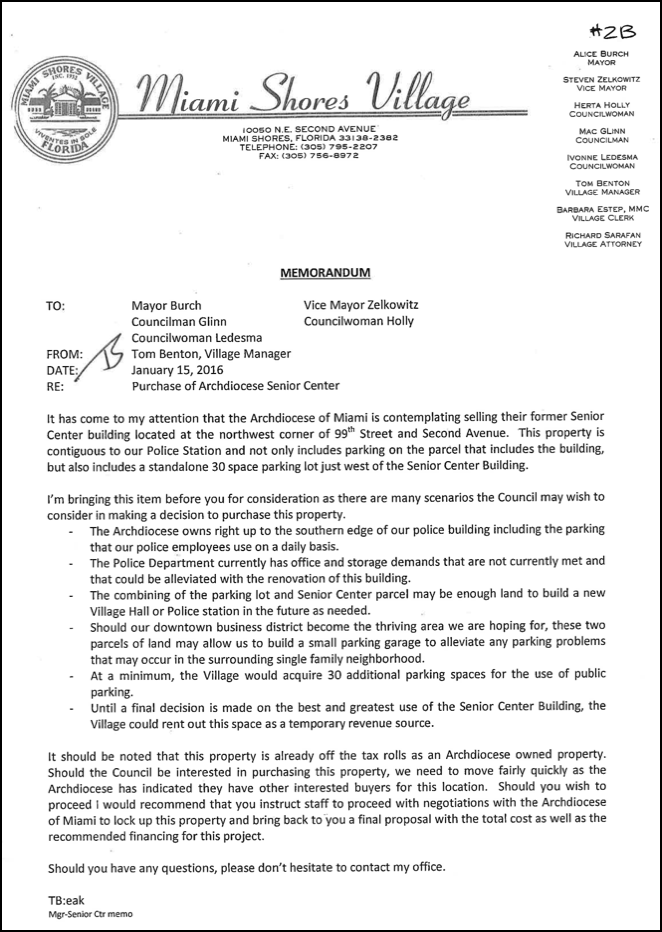 I stand corrected. It seems that you all in your wisdom decided that accepting an emergency item at the end of the meeting on February 2nd, without having first been presented with a formal Resolution, or it appears with any sort of documentation in support of that Resolution, agreed to approve the purchase of the Catholic Charities building for $1.1 million, without even discussing where the $1.1 million was to come from, or whether $1.1 million was actually the best price.

There is also the failure of the Manager engaging in due diligence by seeking an appraisal for the property, which is both a common practice, and a safeguard against undue problems with the property being discovered after the fact, as well as establishing an independent fair market value for the property.

The way in which this purchase was handled - especially after discovering the way that the Village Manager screwed the residents over the renegotiation of the Country Club/Golf Course contract, as well as your attempts to restrict discussion and input at Council Meetings - does not provide me, and I am sure with others in the Village, with much faith that any of you are up to the task of actually looking out for the best interests of the residents, and doing so in a really open and transparent manner that includes asking questions and paying attention to details on our behalf, especially since it's now March of 2017, and after the rush to purchase the building there has been no similar speedy efforts to move forward in deciding what to do with the building.

One could even speculate that both the manner in which this hurry up effort to purchase  the property was conducted, followed by the subsequent lack of speed in determining what to do with this property opens a door into speculation as to just what will happen with this building, and whether this is part of a larger inside deal in the making, that is just waiting for the right time to announce.

We shall see, I suspect.

Now, the Property Appraiser's market value estimates are often considered low, but it does represent a number almost $350,000 lower that the price that the Village paid for this property, and neither the City Clerk or Tom benton has provided me with any documentation that provides any information on how the $1.1 million amount was determined.

A LARGER INSIDER DEAL IN THE MAKING

During the discussion at the January 19th meeting, Vice Mayor Steven Zelkowitz, talked about the possibility of the building becoming a venue for some sort of public/private partnership.

A guy like Zelkowitz doesn't bring up public/private partnerships just to make noise. He's the managing partner of Gray Robinson, a large, politically active law firm that represents folks engaged in enterprises like public/private partnerships, and more than some of the other Council members, I think that more people need to start paying close attention to what Mr. Zelkowitz is up to as a member of the Council, especially after his less than supportive comments about the residents right to speak on the first reading of proposed ordinances.

I want to know out of which Village Piggy Bank the money came from to purchase this building.

I'm not opposed to the purchase of the Catholic Charities building, but I am opposed to the continued discovery that everyone from the Manager to the Mayor to the Council members seems to ignore process, including failing to follow through on written and verbal commitments when it comes to providing factual documentation about what they want, or how they want to spend our money.

What I've seen so far does not inspire confidence that all of the members of the Council necessarily share, or have the residents best interests at heart, and quite frankly I'm surprised at the levels of homophobia, racism and disrespect among the Council, especially the disrespect leveled as Councilwoman Ledesma that I've seen expressed in videos of meetings and in public documents I've had an opportunity to review.

Time will tell if my first impressions become my lasting impressions but if past is prologue, then it seems that I'll be spending far more time writing about the antics of these fine folks that I intended, because if this is how they handled what should have been an open and completely transparent process to buy a building, then I've got a feeling that the schemes behind the curtain to build a $20 million Community Center are going to be a wonder to uncover.