There are approximately 10,000 residents living in Miami Shores, and the overwhelming number of those folks don't care, or want to be bothered with issues related to Village government.

I can say that because that fact is borne out by the minority of residents who show up to vote for members of the Village Council election after election, and by the minuscule number of folks who show up at Village Council meetings, and often leave as soon as the item that they showed up to support or complain about is heard.

For years Village Manager Tom Benton has relied on those facts to pretty much do what he wants, ignore those he doesn't feel are worthy of his attention, and overall run the Village of Miami Shores like an arrogant condo building manager who sucks up to the folks on the upper floors, while ignoring or screwing the folks on the lower floors.

If you one of Tom Benton's pals, or if he figures that it's in his interest to treat you nicely, then you can get just about anything you want from him, even if it means violating the City Charter, or bending or ignoring ordinances.

Benton's behavior, and the way that Miami Shores Village is managed is not something specific to Miami Shores, but rather a symptom of a far larger problem that has to do with the arrogant, insolent and non-responsive behavior of municipal governments across the country that through this kind of behavior have done more to radicalize and turn many otherwise average law-abiding citizens into anti-government zealots than all the ravings that a dozen Donald Trumps could ever accomplish.

I wasn't sure of what kind of response I would get from residents when I first decided to start looking into the behavior of Benton and the Village Council, but my acquired sense of cynicism about both the actions of public officials, and of their coteries of followers and supplicants tempered my expectations, and consequently I haven't been disappointed by the lack of response to some of the issues that one would normally think would galvanize or outrage educated and financially sophisticated residents.

But then again, that hasn't stopped me from either writing about the issues that I uncover, or initiating actions on my own to challenge the misbehavior I uncover, and in fact in a perverse way it only serves to provide me with the energy to continue to do what I do because I've learned that there is a reason why the Greek fable of the Tourtise and the Hare by Aesop continues to resonate centuries after it was first told.

In that vein, here's a tale - with videos - of how Tom Benton responds to questions about issues that every resident in the Village should be concerned with.

At this meeting, I availed myself of the opportunity provided by the Public Comments to ask Tom Benton, the Village Manager to respond to 4 questions. It had been a long day, and I occasionally - given that I'm old - have a senior moment or two, as evidenced in the video.

I have to admit, that I was both surprised and heartened by this email. It was the only email that I have received from any member of the Council that was neither a request that I stop emailing them, or that was prompted by my writing to ask them for copies of emails they had received.

I wasn't sure how Councilman Meltz would go about getting answers, but I thought, mistakenly, that he would sent Benton an email and ask him to provide a report on these issues at the next meeting.

Alas, that did not happen.

On November 21st, the Council met, and Tom Benton did his usual impression of a carved wooden figure propped in a chair.  At the end of the meeting when the members of the Village Council made their comments, here is what Councilman Meltz had tro say about the items that I had asked for information about, and which he had offered to get answers to.

FOR THOSE OF YOU WHO PAY $5,000, $10,000 AND EVEN $20,000 OR MORE IN PROPERTY TAXES, YOU MIGHT THINK THAT MONEY ALLOWS YOU TO AVOID PAYING ATTENTION TO THE MISMANAGEMENT OF VILLAGE GOVERNMENT, BUT ODDS ARE ONE DAY IT WILL BITE YOU IN THE ASS 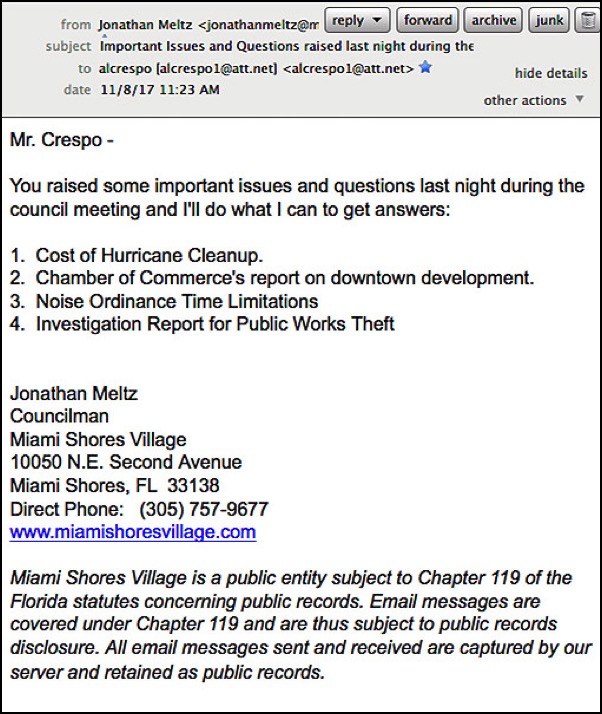 The day after the meeting I received the following email from Councilman Meltz.

Not only had Meltz not bothered to bring along a copy of the email he had sent me to use as a reference as to what to ask for, but he failed to even mention the issue I raised about the Village Noise Ordinance.

So, here's my read on this, and it's a read that I think all of you who read this whether you like me, hate me, wish I would quit writing about the Village, or drop dead should consider as something that involves you too.

Secondly, even though I asked my questions at the November 5th meeting, Benton did not believe he needed to show up at the November 21st meeting to provide answers to those questions, and in fact, we can expect that had Meltz not asked him about these issues Benton would never have responded by providing answers to these questions, if in fact he decides to answer them at tomorrow's meeting.

Thirdly, and sadly, Councilman Meltz, after providing what thought was a thoughtfull response in his email after the November 5th meeting, failed in the two weeks that followed to ask the Manager via email, for responses so that Benton would have had answers to the questions at the November 21st meeting, and lastly showed me the disrespect of not even remembering one of the 4 items that I raised when he did get around to asking for answers.

In fact, his manner in asking for a response from the Village Manager about the issues I wanted answers to, pretty much reveals a level of inattention and unprofessionalism that is not encouraging about his performance at Council meetings. He gets paid $1 a year, and it seems he's willing to give us $1 worth of attention.

I'm not someone who gets overly upset at this kind of disrespect, because I have a blog with several thousand regular readers and the ability to respond to the antics of public officials who think they're immune from being held accountable by publicly revealing when they behave like assholes.

Not everyone does, and there are people in this country who have gone to the nearest gun store for being treated with the same level of disrespect that I have been by the Village Manager and members of the Village Council this year.

This is no way means that I endorse or support that kind of behavior, because I think the best revenge to being disrespected by public officials is either publicly reveal just what kind of lowlife scumbags some of them are, or even better, having them tagged with ethics violations, or even better yet, watching their plans go up in smoke after they've been exposed to sunlight.

However, if you're one of those folks paying $5,000, $10,000, or even $20,000 or more in property taxes, then the big question you should be interested in at tomorrow's Village Council meeting is what will Tom Benton say about these 4 issues?

1. How much did Hurricane Irma recovery efforts cost the Village?

2. What was the final costs of the items stolen from the Public Works Compound the night before Hurricane Irma, and why did we not have security on the property for the entire night?

3. Where is the Report from the Chamber of Commerce on their supposed efforts to generate new businesses for the downtown area, which was the supposed justification for giving them a total of $60,000 to bail them out of their financial difficulties?

4. Why don't we have time requirements for the Village Noise ordinance, and why doesn't the Village actually enforce the ordinance on the books?

Family issues will prohibit me from attending the meeting, but my attendance is of little importance because these are issues that should concern everyone who lives and pays taxes in Miami Shores.