I would venture to say that most of you who look at these photos have probably never actually walked, or even physically been on this part of the Baywalk, and as you can see, without tearing down everything from The Brickell Avenue Bridge to the Riverwalk Metro Mover Station, there isn't enough space to do much of anything other than spend a little money and spruce up this roughly 200 yard stretch of Baywalk.

The worst part of the walk is the section above surrounding the elevated swimming pool at the Hyatt which could benefit from some tree pruning and airing out of the area to let more sunlight in.

There damn sure isn't a lot of excess area to carve out a new city park with a lot of green grass, or for that matter is there any evident need for such a park to be created, except of course for vanity's sake.

I don't know what Russell's real motive was in withdrawing the proposal to put the renovation of the Hyatt Hotel and Convention Center on the November ballot, but creating a fancy new park on any of this property couldn't have been the real reason, because unless there is a study that points to an immediate and overwhelming need to create a park on any of this property, the millions in taxpayer money that it would be required to accomplish anything resembling Zyscovich's rendering is just an out and out pissing away of public money.

If anyone wants to build a memorial to Julia Tuttle, it should be part of the new train station, because it was her effort to get Henry Flagler to bring his trains as far south as Miami so that the land that she owned could be developed is what start the process of what has become known as Miami.

If Russell really wants to be a real champion of the people then he ought to go and find out why the Hyatt Hotel and Convention Center doesn't, like the Flagstone Group and the Rickenbacker Marina, and other for profit ventures on city owned property, have to pay ad valorem taxes on that piece of waterfront property.

That's how a real champion of the people looks out for the taxpayers!

At last week's City Commission meeting Commissioner "Selfie Boy" Russell opposed putting the renovation of the Hyatt Hotel on November ballot - as required because the hotel sits on city owned waterfront property - and as David Smiley reported in the Herald, the Commissioner's opposition was based on his wanting to turn part of the property into a park.

It's easy for Commissioner "Selfie Boy" Russell to talk about creating a public park like the one envisioned in the above architectural rendering, until you realize that in order to do so, you'd first need to use taxpayer money to buy the privately owned hotel, which would then result in it's being taken from the tax rolls, thereby creating a double whammy that would adversely affect a lot more taxpayers than would ever avail themselves of any park that would be built on the property,, and that's before considering that In addition to the missing hotel, the new road that would become become part of a new ramp leading to an intersection at the north end of the Brickell Avenue bridge, is fraught with it's own logistical problems and costs.

I was curious as to how Russell had obtained this architectural rendering, and whether it was in any way based on real redevelopment plans for the hotel and convention center that the city was supporting as part of the request for this renovation being put on the November ballot.

To find out, I wrote the architect Bernard Zyscovich, and asked him those questions. Here are his answers,

master plan study for the whole of downtown. I showed it to

commissioner Russell so that he consider the opportunities for

the City in the negotiations with Hyatt.  He immediately saw the

value in pursuing something like this and was already thinking

along the same lines.

You are correct that rendering shows no hotel because this drawing

shows the potential of a broader idea as well.  To bring ALL of I-95

point, thereby decongesting the connection at the Brickell bridge.  I

drawing.  The space between the 2 roadways would be the new

development site for Hyatt which is 1.5 times the site size as the

Met project across the street.   This would require the cooperation

the acquisition of the hotel to the west, which I decided to depict in

the rendering as shown without the hotel.

the park space on the river.

So, this rendering wasn't based on reality or anything close to reality, but rather on a, 'wouldn't this be cool' idea that Zyscovich had 12 years ago, when the DDA paid him to come up with some pretty architectural renderings about how he thought Miami should look.

As he admits, none of this could ever be accomplished without significant changes in the current roadways, purchase of the River Parc Hotel, and lengthly and not necessarily successful approvals from a lot of agencies, not the least of which is FDOT, which is currently involved in a pissing match over a new I-395 Bridge to Miami Beach.

True to form, once Commissioner "Selfie Boy" got his hands on this rendering it's obvious that he fell in love because it was all blue skies and shiny glass buildings, and of course a shiny new Hyatt Hotel without the boxy and unattractive convention center and next door hotel, thereby  providing the space needed to have a pretty park with green grass.

But it's all bullshit.

The Hyatt is not going to be torn down and rebuilt, nor is the Convention Center going to disappear, and as of Friday afternoon, there was no indication after talking to the manager that the River Parc Hotel owner had any intentions of selling the property, although he did acknowledge that in Miami everything's for sale.

None of pesky hurdles required to make this rendering a reality really matters because Russell's become transparently easy to follow as he searches desperately for any, and every new bauble that he can use as a stage prop in his hustle to promote himself as Miami's next millennial golden boy politician worthy of going to Washington as a Congressman.

This architectural rendering is the kind of phony bullshit that will dazzle his millennial supporters into believing that he's a visionary, "willing to put his neck out," on behalf of Miami's citizens.

In truth though, I, and a growing number of folks not only believe, but are  telling him to his face that this notion that he has been sold that he is Miami's next liberal version of a phony Marco Rubio is both a reflection of his vanity, and of his rank political ignorance.

Russell can continue to believe otherwise, but if he was really interested in creating a city park in this area, he need go no further than paying some attention to the abandoned Fort Dallas City Park which already exists and sits next to the River Parc Hotel.

He might start with something so simple as getting the city's Public Work's department to not only clean up that property, but also the entire Baywalk behind the Hyatt  which could use a good cleaning.

Here are some photos that I took on Friday afternoon.

In support of his argument for turning a sizable portion of the property into a park, Russell introduced the above architectural rendering of the area done by architect Bernard Zyscovich.

When I first saw this rendering, I was struck by the fact that there was something significant missing from this rendering, and that was that between the "new" Hyatt hotel and two of the buildings that currently make up Fort Dallas Park - they are the two small building in the lower right hand of the rendering - there was a large empty space in the rendering above that shouldn't be empty, because in real life there's a hotel that currently sits on that property. 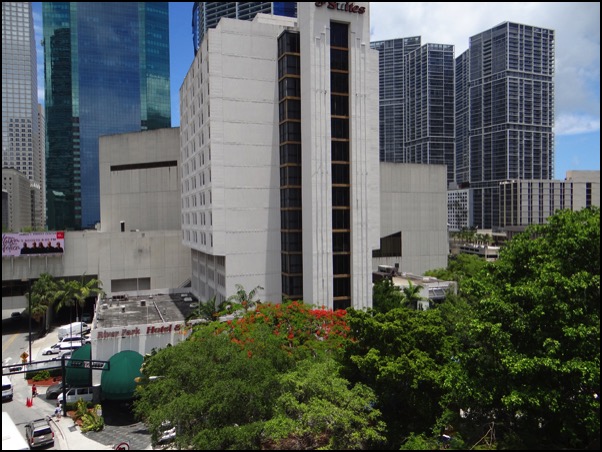 The hotel is the River Parc Hotel, and unlike the Hyatt Hotel and Convention Center, is privately owned and sits on private property. 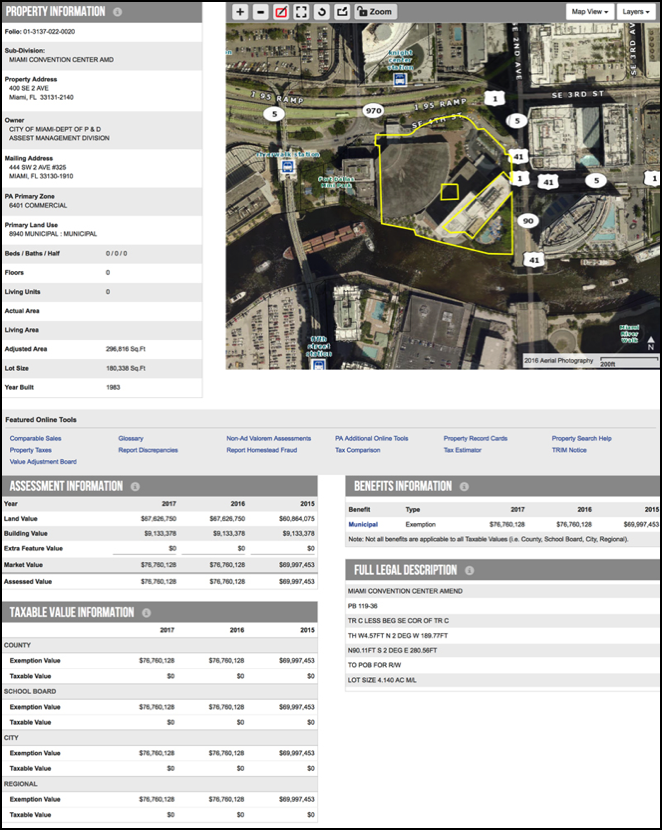 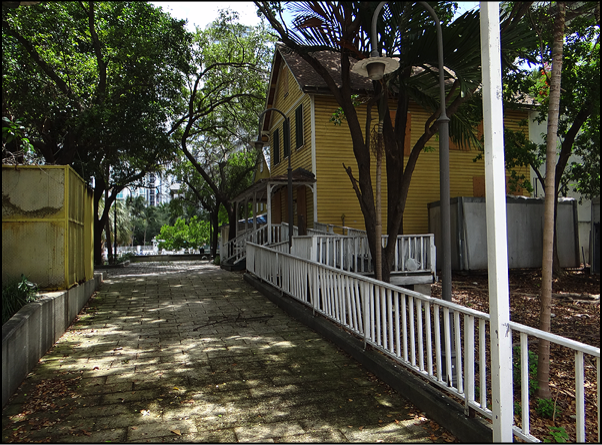 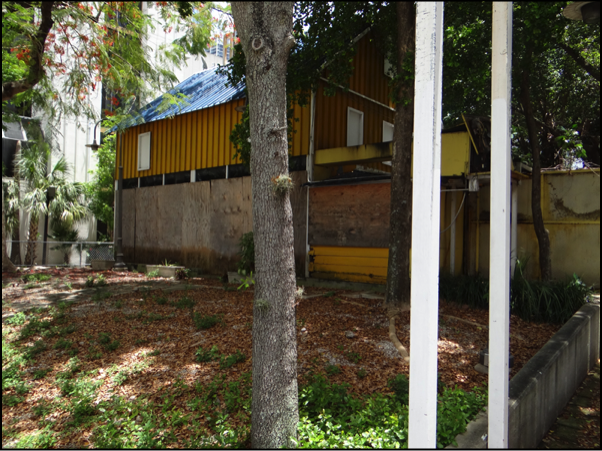 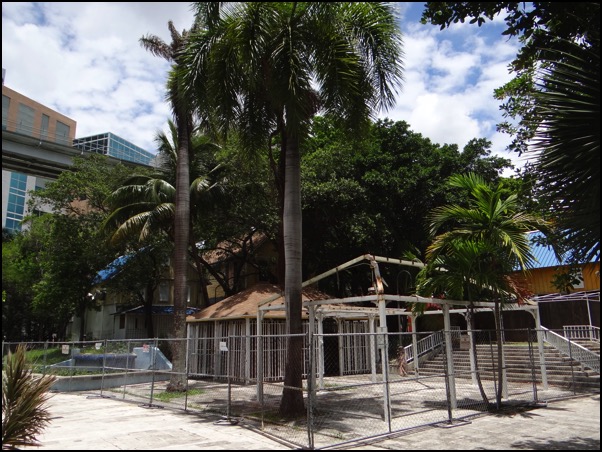 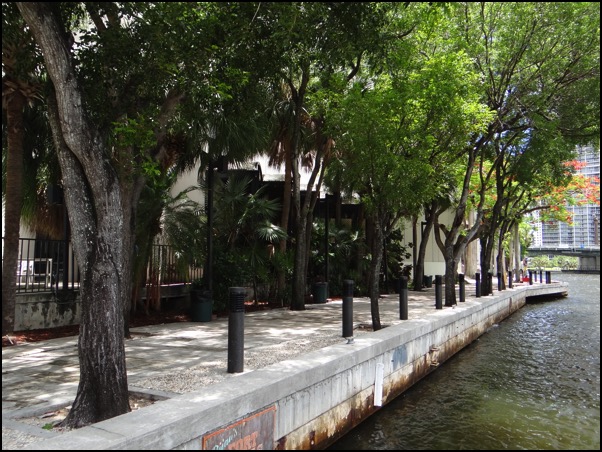 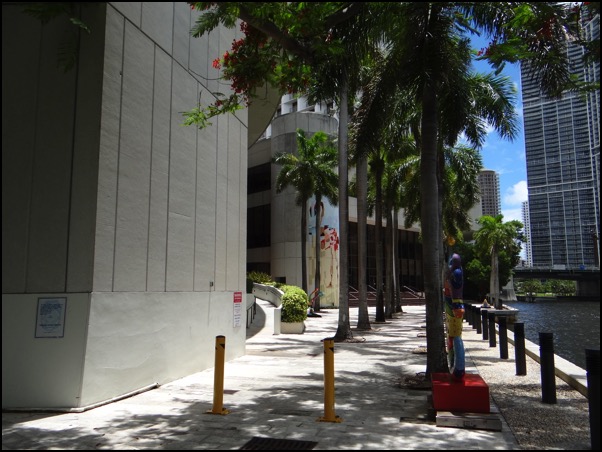 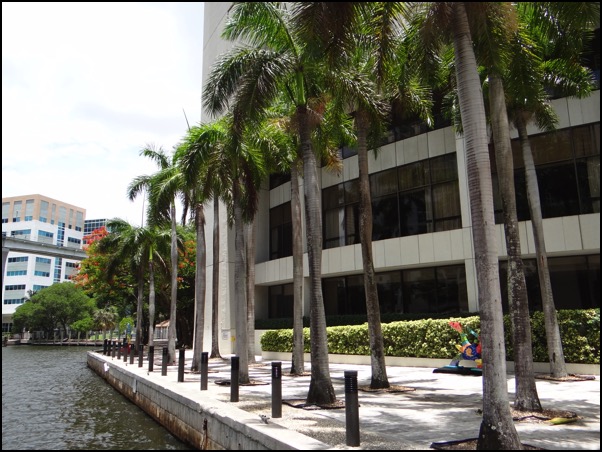 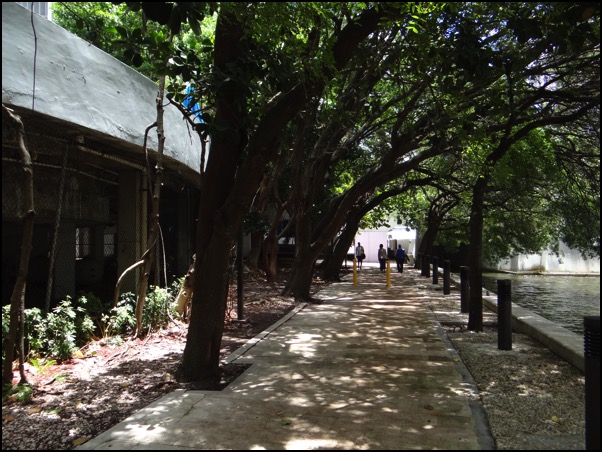 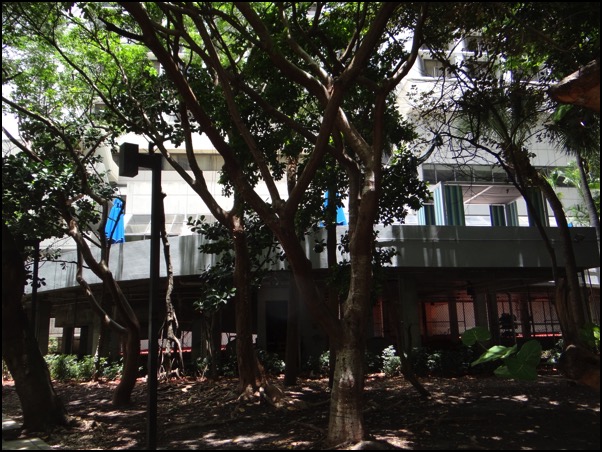 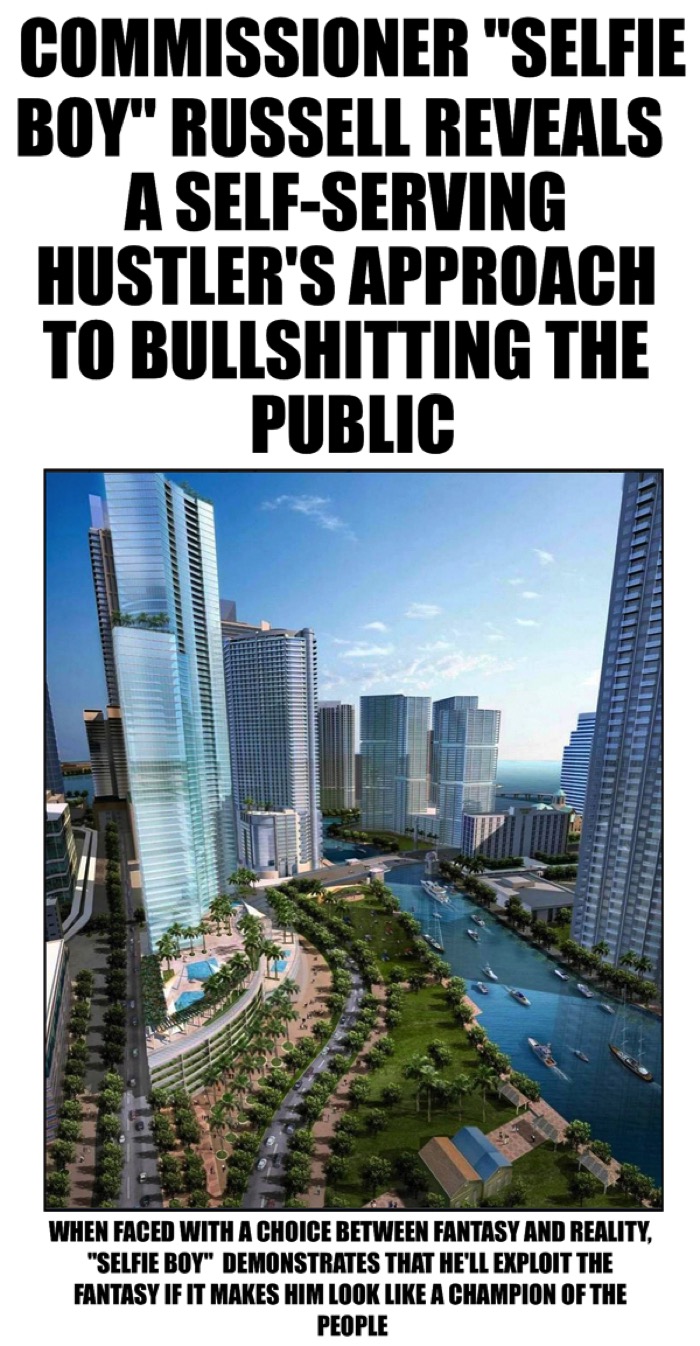