NOT ONLY SHOULD VOTERS BE CONCERNED ABOUT RAQUEL REGALADO'S EVIDENT LACK OF MANAGERIAL EXPERIENCE,  BUT WORSE, THEY OUGHT TO BE CONCERNED THAT SHE MIGHT GET ARRESTED FOR HOMESTEAD EXEMPTION FRAUD - JUST JOKING: KATHERINE FERNANDEZ-RUNDLE WOULD NEVER  ARREST HER JUST BECAUSE SHE COMMITTED FRAUD

One of the most important attributes of a successful life of crime is to always sweat the small stuff.  It's the small stuff that often trips criminals up. This is also true for politicians who choose to engage in unethical or illegal behavior. It's often a stupid or silly little thing that provides that proverbial piece of yarn that once pulled, unravels revealing a far larger scheme or scam that no one ever thought possible.

In Miami a lot of politicians - especially the Cuban politicians who are part of the local Family and Friends Plan that receive protection from both the Miami Herald and the State Attorney - have gotten exceedingly sloppy over the years in sweating the small stuff.

That's because the Miami Herald and the State Attorney have repeatedly made it clear that when it comes to these politicians, even being caught in bed with a young boy or a dead body still might not be enough to force the Herald to report on their crimes, or the State Attorney to prosecute them.

A failure to sweat the small stuff is why I think that Raquel Regalado is not only a bad choice for Mayor of Miami-Dade County, but why I believe the evidence exists for her to be charged with criminal fraud.

Before I get to the criminal fraud allegations, let's address her lack of managerial skills and experience.

RAQUEL REGALADO COULDN'T KEEP THE BOOKS AT A LEMONADE STAND

No matter what you might say about Carlos Gimenez, and I think that I'm on record as having said a lot about his actions while the mayor of Miami-Dade County, he at least had experience as the City Manager of Miami before he ran for Mayor of Miami-Dade County, which is a lot more than can be said for Raquel Regalado, who other than bouncing around from law firm to law firm and serving a term and a half as a member of the School Board, has never done much of anything else except spend her days as a radio commentator and campaign worker for her father's campaigns.

In that capacity, which included serving as the Treasurer of her father's 2009 campaign for Mayor of Miami, she, along with Daddy - as the FDLE Reports revealed - got a pass from the State Attorney's office on actions that should have resulted in both of them being charged with criminal misdemeanors and removed from office.

As someone who admitted under oath in a deposition that she couldn't manage the campaign finances of a race for Mayor of Miami that raised less than a million dollars, or for that matter manage her own School Board School Board campaign account where she was fined $3,526.28 for going 301 days without complying with the instructions of the Elections Commission, the very idea that she could be entrusted with managing a $7.1 billion dollar county budget is one of the truly astounding questions about her candidacy that no one has found either curious, or worthy of discussion.

Yet, these are important issues from the past that Regalado and her supporters would claim have little if any bearing on her current run for Mayor of Miami-Dade County, which is not true because the past is often the prologue to the future, but just for sake of argument, even if we ignore these activities, there are a whole new bunch of activities that deserve being brought to the voters attention, like the following.

The first, and most serious issue has to do with this house at 1850 SW 36th Avenue. 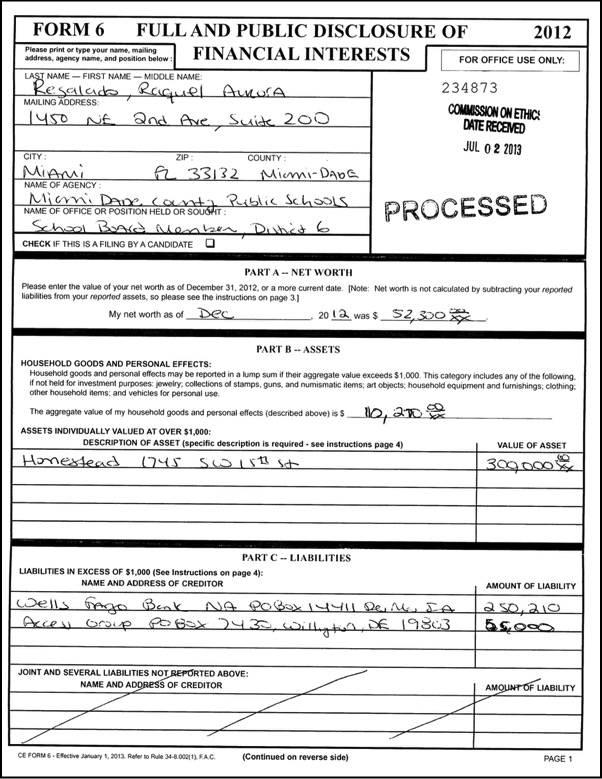 In these same reports Regalado had also claimed that she maintained her law firm at the house owned by Pampin, which made no sense to me because why would she need to do that if she owned a house, and in addition why had she not applied for a Business Tax reciept License to operate a law firm out of that house. To try to get some understanding of why she did what she did  I sent her a list of 6 questions regarding her housing situation.  (You can read my questions and her answers HERE.)

This was her response to the use of the Pampin house address, and why she had never applied for a BTR in order to conduct a business out of that house. 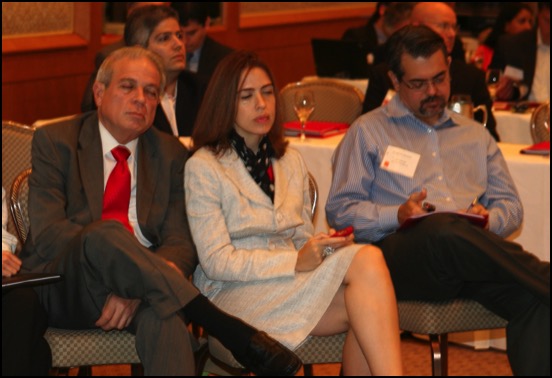 Documents I obtained indicated that the house is owned by a woman named Gema Pampin.  Pampin was one of 7 co-conspirators involved in a $63 million dollar mental health care fraud scheme that in 2013 was resulted in her being convicted and sentenced to 70 months in federal prison, along with being ordered to pay $19.3 million in restitution.

In response to a list of questions that I submitted to her about this story Regalado claimed that she has been renting this house since 2013, and records from the Miami-Dade Property Appraiser's Office confirmed that Pampin throughout this period was continuing to claim that she was living in the house and was therefore entitled to claim an annual $50,000 Homestead Exemption.

Under any circumstances, discovering that a public official was living in a house being used to commit Homestead Exemption Fraud would be reason enough to start alarm bells ringing, but the fact that in this instance it was Raquel Regalado renting the house really sparked my interest.

Once I started digging, it didn't take me long to uncover that Raquel Regalado had some serious problems regarding her own Homestead Exemption claims.

One of the first things I discovered after obtaining copies of Regalado's annual financial reports for the years 2012, 2013, 2014 and 2015, was that in her 2012 report, Regalado had listed a house at 1745 SW 15th Street - a house that she and her former husband jointly owned, and that was at the time the subject of a major foreclosure lawsuit between them and Wells Fargo Bank - as her principal asset and "HOMESTEAD" whose value then was $300,000, and that her reported net worth that year was $52,300. 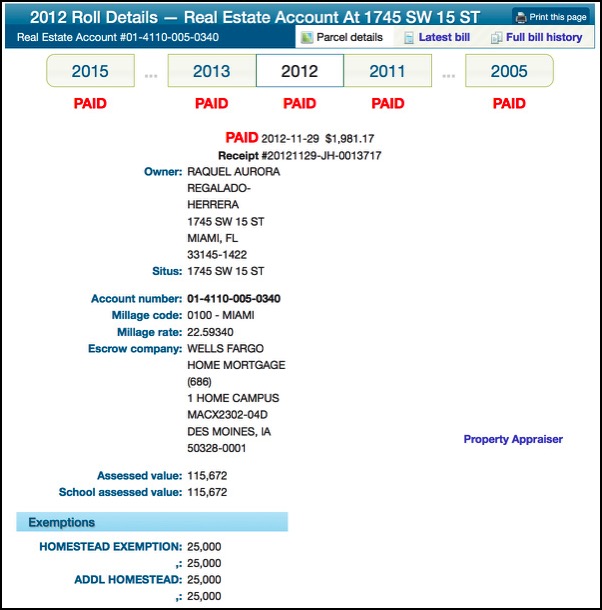 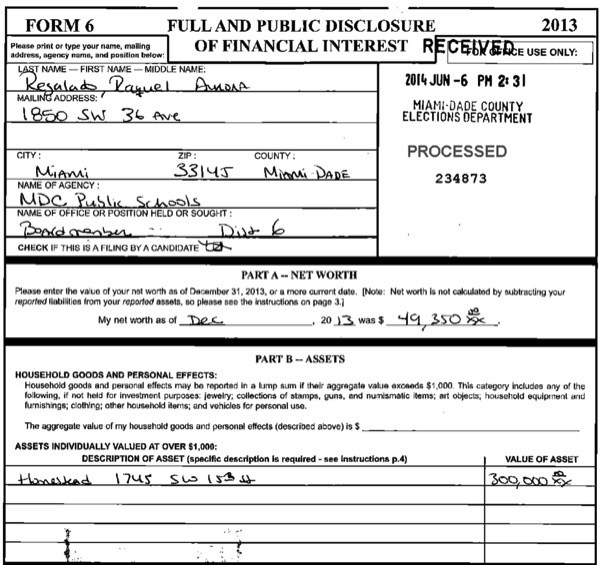 Regalado's explanation was reasonable, were it not for the fact that during 2011, 2012, 2013 and 2014, when she and her former husband were involved in their lawsuit with Wells Fargo Bank all of the documents that were sent to her related to this lawsuit were sent not to 1850 SW 36th Avenue, but to another address, which just so happens to the the address for the little shopping center on the SE corner of Coral Way and 27th Avenue, that has a UPS Store with Mail Box service. Lawyers, who like Regalado need an address to maintain their license often do so by going out and renting a Mail Box at places like UPS stores.

It was here that my theory of sweating the small stuff kicked into focus.  If she gave me an answer that only made sense until I discovered a public document that refuted that claim, then what other claims did she make in her answers to my questions that might also raise questions

That turned out to be her answer to my 6th question, that not only raised questions, but indicated that for a supposedly smart person, Raquel Regalado would a typically dumb crook.

Here is my question, and her answer.

Regalado is absolutely right, being on the title of a property and living in a house are two different things, and so is admitting that you didn't live in the property while claiming a $50,000 Homestead Exemption.

When you list a house on your notarized annual financial form as your "Homestead," and receive a $50,000 Homesteas Exemption, but then admit that you didn't live there in an answer to a question I ask you, then that seems to me to represent a pretty clear case of admitting to Homestead Exemption Fraud.

The best part of this is that in 2015, Regalado's fellow School Board members voted her to be the School Board's representative on the Value Adjustment Board that handles Homesteaf Exemption challenges.

You got to admit, putting someone on the Value Adjustment Board who has first hand knowledge about Homestead Exemption Fraud is just the kind of public service that qualifies Raquel Regalado to be the next Mayor of Miami-Dade County.

Well, maybe not, but then again...

AS PARTOF MY STORY I SUBMITTED A SERIES OF 6 QUESTIONS TO RAQUEL REGALADO, SEVERAL OF THEM DEALING WITH THE HOUSE SHE WAS LIVING IN THAT SHE HAD RENTED FROM A WOMAN NAMED GEMA PAMPIN, WHO RECENTLY GOT OUT OF PRISON AFTER SERVING TIME FOR HER ACTIVITIES AS PART OF A MEDICAL CARE FRAUD RING.

PAMPIN HAS BEEN CLAIMING A HOMESTEAD EXEMPTION DURING THE TIME THAT REGALADO HAS BEEN RENTING THE HOUSE, AND IN ONE OF HER ANSWERS REGALADO CLAIMED THAT SHE ONLY FOUND OUT ABOUT THIS WHEN SHE WAS CONTACTED BY THE PROPERTY APPRAISER'S OFFICE WHO TOLD HER THEY WERE CONDUCTING AN INVESTIGATION.

THAT APPEARS TO BE A LIE. I SPOKE WITH A REPRESENTATIVE OF THAT OFFICE THIS AFTERNOON AND THEY CLAIM THAT THEY HAD NO KNOWLEDGE OF PAMPIN'S ACTIVITIES, NOR DID THEY HAVE AN OPEN INVESTIGATION.