You would think that a responsible Police Chief, in light of reports that Hurricane Irma had become by then the largest hurricane to every form in the Atlantic Ocean, would have weighed his obligations to his department and his community against giving a speech in a foreign country on another continent and stayed home in case the storm chose to come to his city.

That would have been the responsible thing to do.

But this Chief has seldom, when given the opportunity to show good judgment or chosen to act responsibly, done so.

Also, it's not like the Chief and his wife haven't gone on other junkets since he's been Chief, or that he and his wife couldn't afford to go just about any place in the world that their hearts desired after he permanently retires in a few more weeks, because the Chief has managed to do quite nicely financially for himself as a member of the Miami Police Department.

In the last few days I was able to verify these financial numbers for the Chief.

In addition to that, he also got a sizable payment of several hundred thousand dollars from the Police Department's 1% Plan when he retired, and is currently expected to collect somewhere between $20,000 to $25,000 as part of another 1% payout for his time as Chief.

You would think that someone who has benefited financially like the Chief has from the public trough, would consider that he has some sort of obligation to stick around town in case a hurricane comes instead of jumping on an airplane and going to Argentina to give a speech.But he didn't, and then after I questioned Regalado being in Argentina by writing a less than complimentary story and tweeting out: MAYOR TO CITY: FUCK YOU, I'M IN ARGENTINA, BITCHES!, he made arrangements to get his ass on a plane to get back to Miami on the day before the storm arrived.

Not the Chief. He didn't come back to Miami until after IRMA had come and gone, which in the eyes of many represented a clear cut example of what dereliction of duty looks like.

MIAMI'S CHIEF OF POLICE IS AN EXPERT AT WHAT:

The bigger question regarding these junket trips taken by Llanes is what exactly can he claim to be his expertise, and what can he talk about at these gatherings where he is expected to offer pearls of wisdom for his plane fare and free hotel room?

During his time as the Assistant Chief of Police in charge of the Police Property Room, cocaine, steroids, Rolex watches, along with 11 revolvers  who were walked out that room by a Major who told the staff that he was taking the guns to the Chief's Office. These are just items that we know were taken or disappeared. Who knows what else was stolen or removed from that Property Room that hasn't been accounted for.

And that's before we even get to the destruction of evidence tied to almost 200 homicide cases that Llanes failed to protect both as the Assistant Chief and the Chief.

Based on his performance as the person entrusted to protect the evidence in the Police Property Room, I think that one of the speeches that Llanes could give could be titled: PROTECTING EVIDENCE IN YOUR PROPERTY ROOM IS HIGHLY OVERRATED.

Then of course since the center of the herion/fentanyl epidemic is literally just a few blocks north of the Miami Police Department's headquarters another speech that the Chief could give is: THE BEST WAY TO KEEP AN EYE ON HERION/FENTANYL IN YOUR COMMUNITY: LET IT FLOURISH DOWN THE STREET FROM YOUR POLICE STATION.

Because I'm really a nice guy and always willing to help the Chief out, here's a photo I took on Wednesday afternoon less than 5 minutes from Police Headquarters of an overdosed drug addict on the sidewalk being revived. he could use it as part of his speech.  It's always good to use fresh photographs.

On Friday September 22, Police Chief Rudy Llanes and his wife will board a plane - probably an AirEuropa flight - since Miami city officials have since 2011 had a special relationship with this airline .

Along with Miami's gangster Mayor Tomas Regalado and his maybe wife, maybe girlfriend, llanes and his wife and some of the other usual Regalado traveling companions will go to Spain for a 10 day all expense trip.

When the Chief returns, he'll spend a few days in Miami before setting off with the Mayor, Commissioner Willie Gort and others to Antayla, Turkey.

These all expense junkets which have become a staple during the last few years of Regalado's tenure as Mayor have been billed as important economic development trips intended to benefit Miami, but in truth, they've largely been junkets taken by Regalado and his cronies as an opportunity to abuse their official positions by traveling around the world, giving away Keys To The City, shilling for local real estate developers, or trying to line their own pockets with private business deals put together in between giving bullshit speeches that serve as the quid pro quo for the free airfare, hotel rooms and meals.

Earlier this month, when it was rapidly becoming evident that Hurricane Irma was definitely heading for Miami, Regalado, Commissioner Gort, Chief Llanes and his wife boarded a plane to Cordoba, Argentina, for an event billed as the AACC Bilateral Trade Mission. Here's the official list of speakers

OH IRMA, LOOK WHAT YOU'VE DONE GONE AND LEFT US

FOUR YEARS AGO A FEDERAL JUDGE SAID:  “IT SEEMS THAT THE CITY OF MIAMI POLICE DEPARTMENT HAS A CULTURE OF CORRUPTION THAT EXCEEDS ALL OTHER POLICE DEPARTMENTS."  IN AMERICAN CITIES THE STENCH OF CORRUPTION THAT COMES FROM CHIEF RUDY LLANES WOULD HAVE GAGGED EVEN MAGGOTS, BUT IN MIAMI, THE CHIEF IS JUST ANOTHER MEMBER IN GOOD STANDING OF THE CUBAN POLITICAL MAFIA WHOSE LAST DAYS ARE BEING SPENT GOING ON A WORLDWIND SERIES OF JUNKETS AS A REWARD FOR A FUCKING OVER THE DEPARTMENT, THE CITY AND IT'S CITIZENS, WHICH IS WHY WHEN IRMA SHOWED UP LLANES WAS IN ARGENTINA 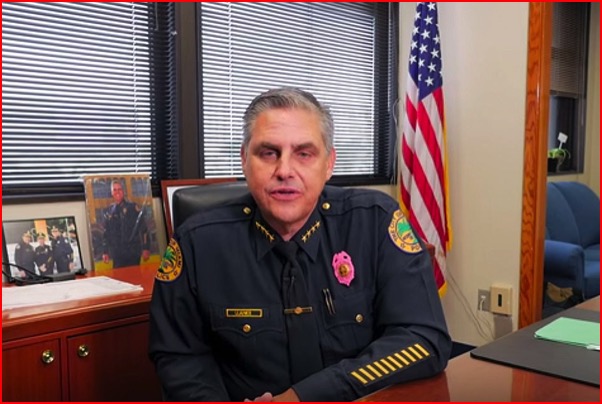 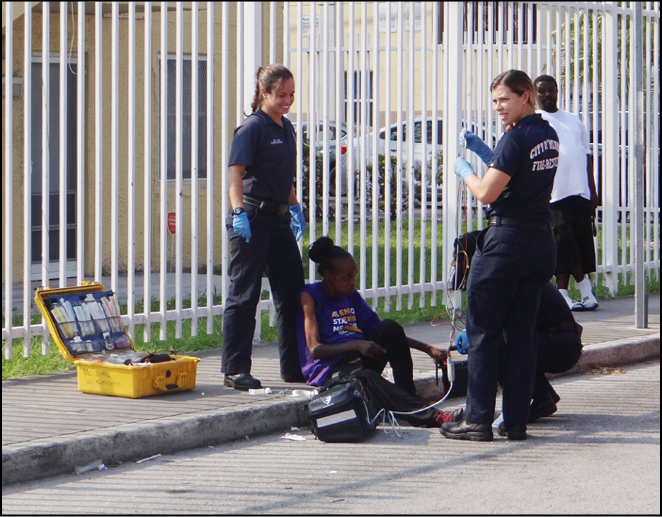 Another speech the Chief could give is about what it takes to be a great police chief, and here he has any number of comments made about him by his his officers and posted on LEO AFFAIRS that he could turn into parts of a Powerpoint presentation, such as these random selections from various posts over the last few months: 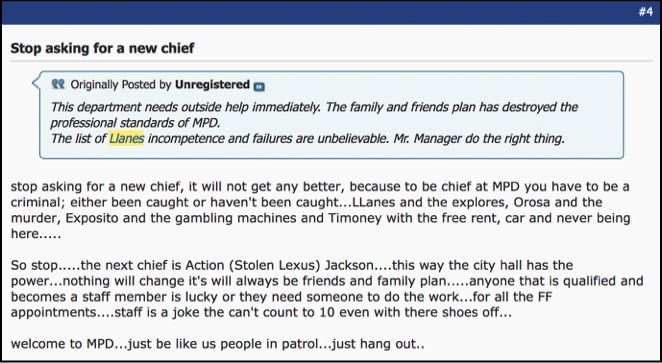 In a police department notorious for it's corruption, mismanagement and outright political sucking up to politicians, it's had more than it's share of weasel fuck police chief's.

Rudy Llanes ranks among the top of that list.