On August 31, 2016, just two weeks before the Manager submitted his memo to the Council, RMA submitted a project proposal to the Village of Palm Springs, Florida in response to an RFQ to Provide Consulting Services For Creation of A Community Redevelopment Agency, for that Village.

The comment that Zelkowitz made about having worked with RMA were based on his serving as the Attorney for several South Florida CRA's, including the City of Miami Beach and North Miami that had used the services of RMA.

On September 14, 2016, the Village Manager submitted a Memorandum to the Council to seeking their approval to allow him to hire RMA to produce a Financial Feasibility Study for a Private/Public Partnership (P3), to redevelop the two blocks where the Village Hall, Police Station and Catholic Charities Building now reside.

"I live and breathe the Sunshine Law...I'm very cognizant

and I'm very careful with it. Maybe elected officials should

read the laws and understand them before acting."

On March 3rd, I wrote a story about the way in which Village Manager Tom Benton went about proposing, and then buying the Catholic Charities building for $1.1 million dollars, without obtaining an independent appraisal of the building or submitting a formal purchase proposal to the Council for approval.

In that story I revealed that although Benton had pledged to submit a formal purchase proposal in the memorandum that he submitted to the Council on January 19, 2016, and even though Councilman Zelkowitz made that a stipulation as part of his motion giving Benton the authority to negotiate the purchase of the building:

"I make a motion to authorize the Village Manager

and the Village Attorney to negotiate with the Archdiocese

and bring back a contract for purchase back to the Council

What did happen was that at the February 2, 2016, Council meeting, City Attorney Richard Sarafan, without any supporting paperwork including the previously requested contract for purchase, asked the Council to approve an Emergency Resolution allowing him and the Village Manager to finalize the deal, because he claimed, "there was a short time line," that required immediate action.

As appears to have been the case in this, and in other issues that I've reviewed, the members of the Council failed to ask any pertinent questions and basically rolled over like pliant patsies in giving approval for the purchase of the building.

As it turns out, the purchase of the Catholic Charities building represented the last significant piece of property needed to allow the Village to move forward in an effort to redevelop downtown Miami Shores, and that effort became the basis for a report that will be submitted to the Village Council after the April 18th election.

The report, and it's potential impact to the Village - which is at the core of Part II of this series - was produced by Redevelopment Management Associates (RMA), a Pompano Beach, Florida company that has a long, and occasionally questionable history of working with Community Redevelopment Agencies (CRA) and local governments on their downtown redevelopment efforts.

The relationship between the Village and RMA was initially formalized at  the January 5, 2016, Council meeting where the Village Manager presented RMA as the company that a selection committee had chosen in response to an RFQ, to produce a  Downtown Design Criteria study.

Here is a video clip from that meeting where Councilman Zelkowitz both makes the motion to authorize the Manager to negotiate a contract with RMA, but also acknowledged that he had "worked with RMA in other cities, Miami Beach and North Miami, they're very professional, very qualified, and I think they're going to do a very good job for us." Zelkowitz's comments on RMA start at 2:04:55.

In addition to this diagram of the FIRM/TEAM, the proposal included multiple pages of information on Zelkowitz, including his bio, and the activities of Gray Robinson and their work with CRA's. (You can find all of that HERE, starting at page 123 of the RFP.)

On September 20, 2016, the Miami Shores Village Council met, and after a discussion that DID NOT include an admission, acknowledgement or recusal by Vice Mayor Zelkowitz, because he and his law firm were at that time part of the RMA Team in the Palm Springs proposal, spoke in favor of, and voted to support the Miami Shores Village Manager going forward with the RMA contract.

Here's the portion of the minutes that shows that the vote was unanimous.

ABUSE OF OFFICIAL POSITION: VICE MAYOR STEVEN ZELKOWITZ'S TANGLED WEB OF LEGAL BUSINESS RELATIONSHIPS RESULTED IN A FLAGRANT CONFLICT OF INTEREST VOTE FOR THE COMPANY THAT THE VILLAGE HIRED TO DO THE FINANCIAL PROPOSAL TO REDEVELOP  DOWNTOWN MIAMI SHORES 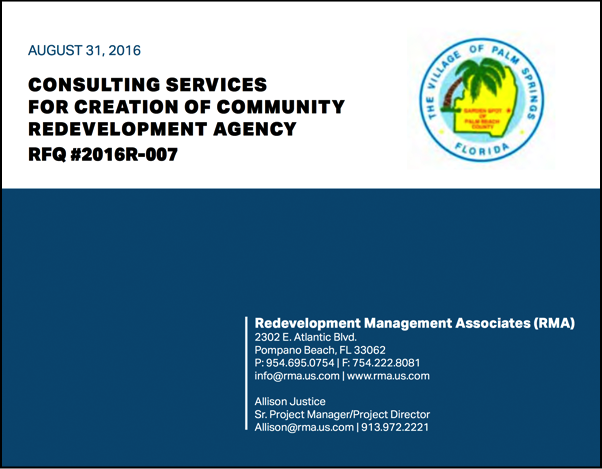 As part of their proposal, RMA included a detailed list of their FIRM/TEAM that would be working on this project.  Included as part of the team was Steven Zelkowitz, Managing Partner of Gray Robinson, and currently a Miami Shores Village Council Member. 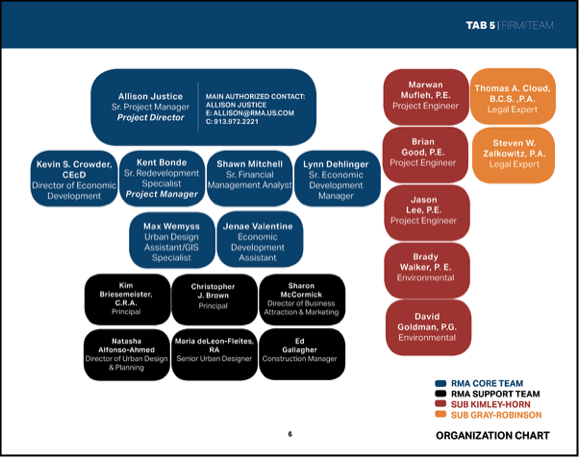 Here's the video clip of that portion of the Village Council meeting that shows what was said and done.

So, let's recap before we go further.

endorsement of RMA at the Council meeting where they

were awarded a $59,000 contract to create an Architectural

design manual for the Village, claiming that as the attorney

for several CRA's he had "worked with RMA in other cities,

very qualified, and I think they're going to do a very good

job for us."  Zelkowitz also made the motion supporting the

award of the contract.

new CRA for the Village of Palm Springs, Florida, and

listed Zelkowitz and his law firm, Gray Robinson as

consultants, devoting a total of 4 3/4 pages of their proposal

extolling their virtues and professionalism.

and voted to award a second contract, this one for RMA

to create a Financial Feasibility Study for a Private/Public

Partnership (P3) for the redevelopment of downtown Miami

Shores, without acknowledging, revealing that he and his

firm had signed on as paid consultants to RMA in another

deal that was at that time being reviewed by the Village

Here is a part of the Miami-Dade Ethics Commission's rules on conflicts of interest. 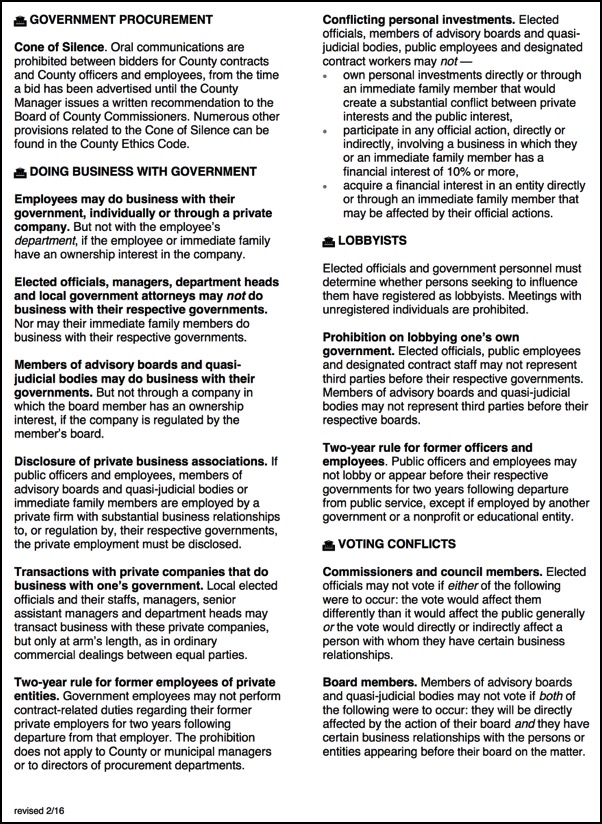 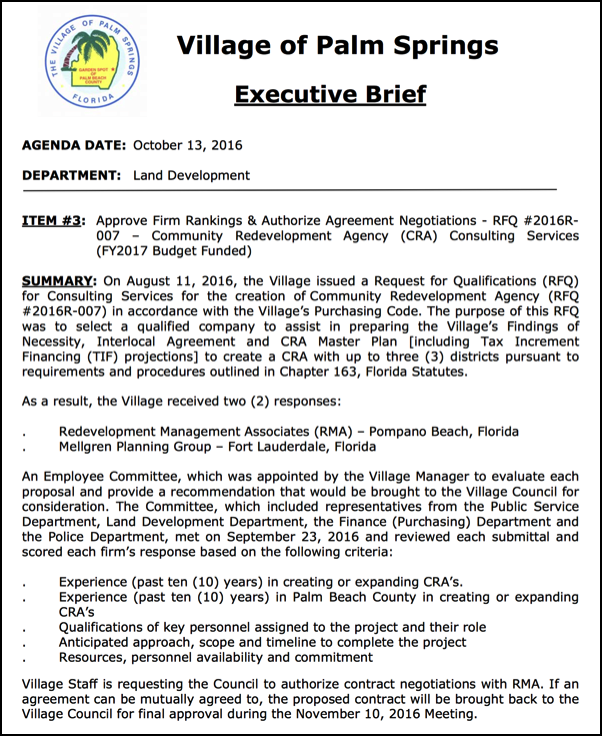 On October 13, 2016, the Village of Palm Springs declared that RMA had come out on top in their selection process and, if a contract could be negotiated, that contract would come up for approval at their November meeting.

But wait, here is where it got really interesting, because remember how I described RMA as being a company that had a questionable history.  Well, as Paul Harvey used to say: "Here's the rest of the story." (For all you young people, you'll have to Google, Paul Harvey.)

Michele Millgren, the president of Millgren Planning Group, the other bidder on the Palm Springs job, read RMA's proposal when the Village announced that RMA had been selected and discovered that they had committed what she considered to be a fraudulent misappropriation of her resume and filed a Bid Protest.

Here's what the Florida Bar Rules says about the expected behavior of lawyers who serve as elected officials.

And of course, there's Zelkowitz's comments about knowing and following Florida's Sunshine Law that he made in response to the story about Village Mayor Alice Burch's alleged violations of the law in her efforts to block the renewal of the contract for the Executive Director of the Doctor's Charter School.

On November 23, 2016, Rebecca Morse, the Palm Spring's Chief Financial Officer determined that while she had not established that RMA had made any "fraudulent" misrepresentations, she did find that they had been both confusing in their description of the work they did for the Dania CRA, and that they also failed to mention the work that another company had also done, and cancelled the RFQ and the bids.

The behavior of Vice Mayor Steven Zelkowitz in casting this vote supporting the award of a contract to RMA at the same time that he and his law firm, Gray Robinson, were included as consultants in  another RMA bid elsewhere is the kind of sleazy, unethical and illegal behavior that makes so many people believe that government to its core is corrupt, and obviously occurred because he figured that Palm Springs was far enough away, and no one would ever connect him to the bid submitted by RMA.

NOTE: Councilman Zelkowitz did not respond to a request for comments about the allegations in this story.

Given his pronouncements about his knowledge and adherence of the Sunshine Law, and his long history of governmental involvement as the attorney for a number of Community Redevelopment Agencies in South Florida, what Zelkowitz did cannot be excused or considered as an act of ignorance or a inadvertent lap of judgement.

He, more than most lawyers in Florida knows the law, brags about knowing the law, and in this case clearly violated the law.

Let's see if he knows what principled behavior calls for in this situation.

Here are three examples taken from Miami-Dade Ethics Commission opinions that are analogous  to the vote that Zelkowitz made on September 20th.

IN PART II OF THIS STORY I WILL REVEAL HOW THE REPORT THAT RMA PRODUCED FOR THE POSSIBLE REDEVELOPMENT OF DOWNTOWN MIAMI SHORES HAS A DIRECT IMPLICATION TO THE PASSAGE OF THE $20 MILLION BOND ISSUE FOR THE COMMUNITY CENTER, AND WHY THIS CONNECTION COULD WELL BE THE REAL REASON WHY THERE HAS BEEN SUCH A RUSH TO PASS THIS BOND ISSUE BY THE VILLAGE MANAGER AND SOME OF THE COUNCIL MEMBERS